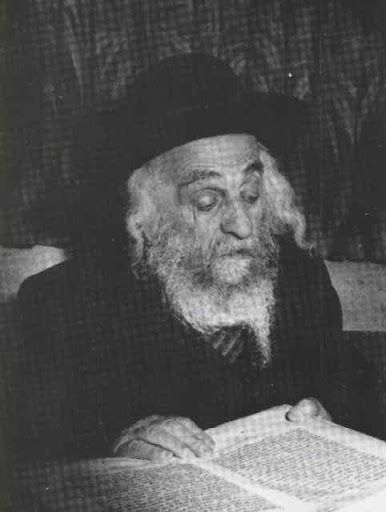 Take a good look at this picture.

Would you believe me if I told you that this elderly Jew:

* Rescued two orphaned siblings from a government orphanage – despite terrible financial woes and under the watchful gaze of the KGB – and adopted them, raising them to Torah and mitzvos and successfully sending them to the Holy Land

* Was imprisoned in the notorious Kiev Prison for the ‘crime’ of spreading yiddishkeit and, although near-certain to be executed, was miraculously freed at the last moment by the Prison warden – an estranged Jew originally from a Breslover family who had sworn to his father to protect Breslover Chassidim

* Became the ad-hoc Rabbinical authority in the DP camp of Bad-Reichenthal, enlisted by the Klausenberger Rebbe to oversee the building of Mikva’os

* Merited to emigrate to Yerushalayim, where he reunited with his children and was unanimously accepted as the leader of the Breslover Chassidim – arranging all matters spiritual and physical and marking a glorious new age in the history of Breslover Chassidus which continues to flourish to this day

* Toiled – despite old age and near-blindness – to set up a large “Kimcha D’Pischa” fund to ensure the poor would have what to eat on Yom Tov, just as he had in Communist Russia

*Would, after his blindness set in, often correct deviations from the exact wording of the text made by the bochur assigned to reading his enormous daily quotas of Torah study aloud

*Led the Rosh HaShanah prayers with a penetrating and roaring voice that melted the stoniest of hearts for decades in the most unimaginable circumstance – praying the entire tefillah by heart after he went blind (one year, my father asked the bochur appointed to stand next to the tzaddik in case he needed help with the words how often his service was required. His response: “Never.”)

* Left this world at the ripe old age of 93 with the joy, strength, and vigor of a young man – despite his difficult illness – until the final moments

Would you believe me?

Today, 22 Tammuz, is the yahrtzeit of Rav Levi Yitzchak Bender zy”a, one of the legendary figures in Breslov Chassidus who is credited with singlehandedly reviving the Chassidus after the war – from building the famed “Shul” on Rechov Meah Shearim to transmitting the massive oral tradition of Breslover Chassidus just as he faithfully received it from the leading mashpi’im of the previous four generations back to Rebbe Nachman himself.

The elderly Jew pictured below – with all his sweetness and gentleness – was a fearless and ferocious warrior for Hashem who stood up and stared evil in the face time and time again and always emerged victorious. “Rav Levi Yitzchak” – these words have become more of a concept than a name, conjuring a gigantic torch of incredible courage, sweetness, strength, Torah, avodah, mesirus nefesh, chessed, boldness, and utmost humility (part of why so few outside of Breslov circles have ever heard of him) which illuminated some of the most intense darkness in history.

Light a candle today to honor the memory of Rav Levi Yitzchak ben Avraham Noach, an exalted and angelic soul to whom the Jewish world owes more than we can begin to imagine.

R’ Yaakov Klein is the founder of the Lost Princess Initiative, an education platform founded on the message of Rebbe Nachman’s story, “The Lost Princess” devoted to increasing awareness of and enagagement with the teachings of Chassidus and P’nimiyus HaTorah.