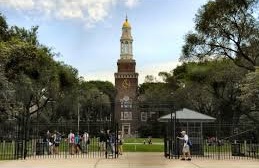 President Gould recently released a statement condemning the inappropriate behavior, but no details were made clear as to what the course of action would be in the coming days. “The university needs to act on this and enforce disciplinary action on the students that participated,” Assemblyman Hikind said. “It’s nice to issue a statement apologizing for what occurred, but actions speak much louder than words. We need to send a strong message that this hateful behavior will not be tolerated.”

Tuesday afternoon’s faculty council meeting was interrupted shortly into the session when 10 students began chanting unruly obscenities toward Chairman of the Faculty Council Yedidyah Langsam and several other administrators, calling the chairman a “Zionist —-.” Some faculty members even began applauding the anti-Israel rants. Dozens of administrators who attended the meeting reached out to Assemblyman Hikind, saying they felt intimidated and feared for their safety.

“Without enforcing any sort of disciplinary action, what kind of message does a simple apology send to everyone at Brooklyn College?” Hikind reiterated. “Reprimanding the students involved will send a clear message that hatred won’t be tolerated.”