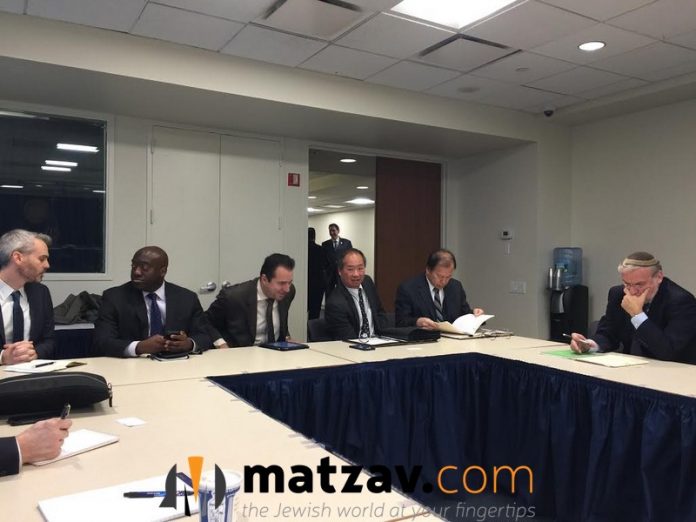 During Monday’s meeting at the Governor’s office, Assemblyman Hikind pleaded with Commissioner Eng and DOT officials to postpone eliminating right turns until further review, refuting accident statistics they claim justified their wanting to make these changes. According to DOT statistics, there were 10 accidents over a two-year period along Avenue J and Ocean Parkway, none of which were a result of making right turns. Over that same two-year period, there were only 2 accidents from right turns along Avenues P and Ocean Parkway, as well as Kings Highway and Ocean Parkway.

“The whole premise of the Ocean Parkway Pedestrian and Bicyclist Safety project is to improve safety, and it’s very hard to imagine a safer Ocean Parkway with these changes being implemented,” Hikind said.

“There is no justification based on the statistics provided by the NYS DOT that warrant the elimination of right turns onto Avenues C, J, P and Kings Highway,” Hikind added. “Eliminating these turns will only divert traffic onto service roads and further congest these narrow streets. By sending even more traffic down these service roads, which already sees its fair share of school buses, emergency vehicles and sanitation trucks, traffic will undoubtedly bottleneck and these roads will become impassable, creating more havoc than intended.”

Hikind left Monday’s meeting hopeful that the NYS DOT will take a step back and revisit the proposed changes before moving forward. “For the sake of our community and the safety of our children, senior citizens and all parties affected, I pray that Deputy Commissioner Eng and his officials revisit the plans and reconsider suspending these changes until further review,” Hikind said. “We have fought very hard, and I’m proud to stand with my fellow elected officials in continuing to fight these changes from being implemented.”

In addition, Assemblyman Hikind requested the community continue calling the Governor’s office @ 212-681-4580 to voice their concerns.