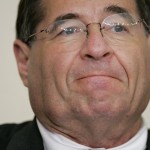 “In today’s statement, Congressman Nadler presents a false narrative. This issue is not about America refusing to admit refugees. It is about protecting America from those who want to cause havoc to our country. Congressman, are you aware that 47 of your Democrat colleagues supported this bill? We want to make sure that the people that come into this country are not coming in under the guise of being a refugee when in fact they adhere to a radical Islamic ideology that threatens our national security.”

Hikind added, “We all support refugees—my parents both came to the United States after the horrors of the Holocaust. We’re a country of refugees. But as the recent attacks in Paris demonstrate, the security concerns are serious and we cannot be naive. Is America today equipped to do that today? Until we are certain of that, we’ve got to be very tough.”

H.R. 4038 would require the FBI director to certify a background investigation for any national or resident of Iraq or Syria seeking admission to United States. The Director of National Intelligence and the Director of Homeland Security would also have to concur in that assessment. The bill passed today in the House by 289-137, with 47 Democrats voting in favor.