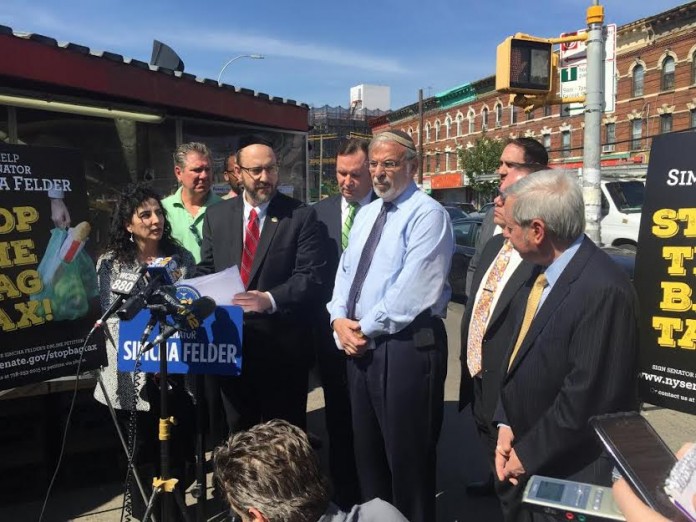 The mayor’s office Tweeted the following: “After the violent events in Charlottesville, New York City will conduct a 90-day review of all symbols of hate on city property. The commemoration for Nazi collaborator Philippe Pétain in the Canyon of Heroes will be one of the first we remove.”

Assemblyman Hikind, who brought awareness of the Petain monument directly to the mayor, applauded the mayor’s actions. “We are confronted every day with bigotry and divisiveness,” said Hikind. “New Yorkers have an obligation to say, ‘Not in our city.’ It’s time to remove all of New York City’s monuments and markers that glorify bigotry and strengthen that which perpetuates these ignorant beliefs. I applaud our mayor, as I know all of New York will, for taking quick action on this important matter.”

In May, Assemblyman Hikind turned attention on the markers commemorating French Vichy Leaders Marshal Philippe Pétain and Pierre Laval. The granite markers are located on Morris and Broadway in the Wall Street area’s “Canyon of Heroes.” Laval helped the Nazis arrest thousands of Jews for Deportation to their deaths. After the war, he was executed for his war crimes.

Pétain’s anti-Semitic policies were even harsher than what the Germans had adopted. His policies banned Jews from various professions and activities, which eventually led to the deportation and murder of nearly 100,000 Jews, as well as Gypsies, homosexuals, and left-wing activists. Pétain was convicted of treason in 1945. He was sentenced to death by firing squad but France’s President Charles de Gaulle commuted the sentence to life imprisonment.