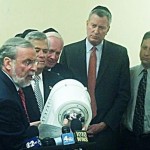 Assemblyman Dov Hikind (D-Brooklyn) says the success of his $1 million security initiative is already being felt in the community. In a recent meeting with SecureWatch24, which designed and installed the state-of-the-art cameras throughout Boro Park and Midwood, Hikind was told that all cameras are now up and functioning, and that some footage has already been useful to law enforcement.
“I secured funding from the State for this Security Initiative because our community is a potential target for attacks,” said Hikind. “Several years before, I had numerous security cameras placed throughout our district’s subway platforms and we saw their impact. Now, our streets are also watched, decreasing the chances of criminal attacks while aiding law enforcement’s ability to solve local crimes. We have given the police another essential tool to protect us with. If any person were to go missing, G-d forbid, we have exponentially increased the ability to locate and recover that person. If there’s an assault on someone in our community, we have increased our chances of catching the criminal.
“People walking to shul on Shabbos and the Yomim Tovim can look up and see the blue lights on those cameras. And they know there’s other cameras not far away. Other communities are already holding us up as an example and attempting to emulate how well we work with government to safeguard our community.”
Working with the NYPD and community leaders, Assemblyman Hikind’s office identified key locations throughout the Boro Park and Midwood areas that would offer the broadest surveillance coverage. 80 units containing 4 (four) cameras each, for a total of 320 cameras, were then installed to create a virtual eye that can see what has occurred on the streets of the community in the event of a crime.