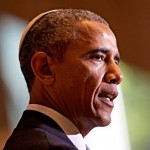 I don’t believe President Obama is an anti-Semite. Neither do I believe that he hates the State of Israel. In his own mind’s eye, Obama’s quest for a deal with Iran may indeed be prompted by the very noblest of intentions. Thus is the path to purgatory.

Obama would do well to read Moby Dick. Obsession with a monstrous, destructive force and the gross underestimating of a monster’s capacity to annihilate is not just the thing of novels and fantasies but recent history. Chamberlain, too, believed what he wanted to believe, and the price of his misplaced trust was the lives of tens of millions. Just imagine what history would look like if Nazi Germany’s heavy water experiments had succeeded in time and Hitler had acquired an atomic bomb.

Today’s situation with Iran is no different.

Nevertheless, in his publicly calm but privately fanatical quest to establish a legacy, the President of the United States has donned a set of blinders as thick as Chamberlain’s which effectively obscures everything that he’d rather not see or believe about Iran, the leading sponsor of terrorism in the world.

This is the problem with obsession. As Virginia Woolf pointed out, “All extremes of feeling are allied with madness.” It’s madness for the President of the United States of America not to dispassionately take into account facts about Iran that shouldn’t be ignored—facts that his own advisers are almost desperate to have him understand.

Frankly, I haven’t found it the least bit surprising to hear so many high-ranking officials—individuals who are genuinely in the know—dishing on Obama’s personal and purposeful attempts to undermine the State of Israel. What I have found surprising is what has taken them so long. Michael Oren, Israel’s former ambassador to the United States, is the most recent voice to join the choir and warn of Obama’s obsessive need to turn back the clock on the State of Israel, a position he clearly held long before he entered the White House.

“From the moment he entered office, Mr. Obama promoted an agenda of championing the Palestinian cause and achieving a nuclear accord with Iran,” writes Oren. “Such policies would have put him at odds with any Israeli leader.”

Of course they would have. They are putting our President at odds with anyone who can understand the clear and present danger of a nuclear Iran. I’ve been saying this all along—and I wasn’t alone—but now others who were once close to the President are admitting the truth.

The truth is we are playing a very dangerous game trusting Iran. By “we” I don’t mean we Jews or we who love the State of Israel. I mean Americans. I mean people who don’t want to see what a terrorist State like Iran will do with weapons of mass destruction.

“Mr. Obama posed an even more fundamental challenge by abandoning the two core principles of Israel’s alliance with America,” writes Oren—who represents the center-left—in a recent Op Ed in The Wall Street Journal. That first principle was to disagree vehemently and publicly with Israeli policies, which Obama did immediately after he was inaugurated. “Israel just sits on the sidelines and that erodes our credibility with the Arabs,” the president told American Jewish leaders in 2009, ignoring Israel’s 2005 withdrawal from Gaza and its two previous offers of Palestinian statehood in Gaza, almost the entire West Bank and half of Jerusalem—both offers rejected by the Palestinians.

The other core principle voided, explains Oren, was “no surprises,” which Obama discarded upon his first meeting with Prime Minister Netanyahu, in May 2009, by abruptly demanding a settlement freeze and Israeli acceptance of the two-state solution. The following month Obama traveled to the Middle East, skipping Israel and addressing the Muslim world from Cairo.
And from there it grew worse. As I said it would. Obama made little effort to mask his personal dislike for Israel’s Prime Minister, and he allowed (or perhaps encouraged) his administration to be downright confrontational.

What did this tell Israel’s enemies? Only that a new chapter had begun. Only that there was a new Pharaoh who no longer knew Joseph. Negating promises made by previous U.S. Presidents, Obama was set to prove that not only wasn’t he Bush, he wasn’t Clinton either. Israel’s historically close relationship with the U.S. was no longer of value. And Iran’s ability to gather the might necessary to do that which they’ve promised to do for decades—destroy the State of Israel and every Jew who lives there, G-d forbid—this promise was no longer an empty threat.

There’s no need to look back over six years—recent events say it all. If President Obama shed any tears for Shelly Dadon, a young Israeli woman stabbed to death by an Arab because she was Jewish, he did so privately. If our President had any concern for the three Israeli teenagers kidnapped and murdered because they were Jews, he kept those concerns well hidden. But when a lone Arab teenager was murdered by extremist Israelis (who were almost instantly arrested), that anomaly was regarded as immediately condemn-worthy by the President of the United States.

As there are ongoing conflicts throughout other regions of the Middle East—in Syria, in Iraq—our President has remained focused on a “peace in our time” legacy with Iran, a mission that will change the balance of power and endanger the entire world if Iran reaches its nuclear goal.

Even Dennis Ross recently had harsh words for Obama’s Middle East policies. Ross, the special Middle East coordinator under President Bill Clinton and President Obama, was a special adviser for the Persian Gulf and Southwest Asia (which includes Iran) to former Secretary of State Hillary Clinton. Ross, who is not a Republican, not a member of the Knesset, admitted that Obama made “errors” in his efforts to advance a diplomatic process between Israel and the Palestinians that prevented an agreement from being reached. Insisting on a complete building freeze, including natural growth, established a standard that couldn’t be achieved and gave the Palestinians an excuse to sit back and do nothing.

“Obama would become more convincing if his questions on how to pursue peace wouldn’t focus so much on Israel,” Ross said.

But that’s been impossible for our president because his obsession gets in the way.

And like Captain Ahab’s crew, we stand in astonishment at what lies ahead.