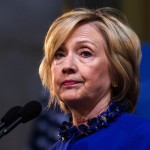 The group “showed that the email issue was drowning out nearly everything else that Mrs. Clinton was hoping to communicate to voters,” the Times reported.

Days later, Clinton inched forward with an apology for “confusion” over the private email issue.

On Tuesday, Clinton apologized for using a private server in an interview with ABC News. “I could have—and should have—done a better job answering questions earlier,” Clinton said in a statement. Read more at the New York Times.