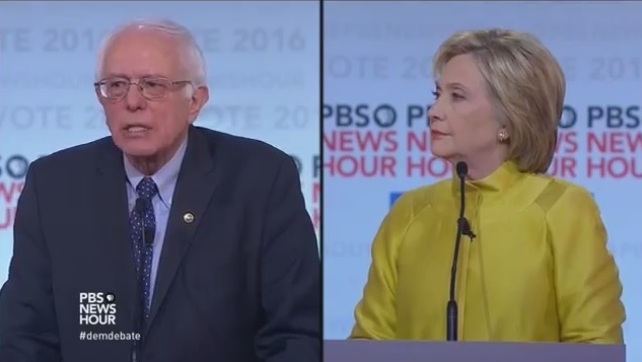 Fresh off her double-digit loss in New Hampshire, Hillary Clinton sought to undermine surging rival Bernie Sanders here Thursday night, arguing that his expansive agenda for government action on health care, college costs and infrastructure investments is both impractical and far more costly than he has said.

The debate turned fiery only in the closing minutes, when the two clashed over foreign policy and over comments by Sanders critical of President Obama.

“I couldn’t disagree more,” Clinton said, accusing Sanders of leveling the kind of attacks on the president usually heard from Republicans.

Overall, the debate highlighted anew the fundamental fault line between the two candidates for the Democratic nomination, with Sanders standing his ground on behalf of a big and bold agenda that has energized progressives across the country and Clinton expressing her support for many of her rival’s goals but arguing that she has the preparation to make real progress in a divided country.

After a pair of heated contests in Iowa and New Hampshire, the two Democrats spent much of their two-hour debate in relatively civil disagreement. They disagreed over the size and scope of government and traded views on topics including race and criminal justice, immigration and Social Security.

In her closing statement, and without Sanders having an opportunity to reply, Clinton opened up a new argument against her rival, implying that Sanders’s focus on the corrupting influence of political money on government is too limited. “I’m not a single-issue candidate, and I don’t believe we live in a single-issue country,” Clinton said.

The debate probably changed few minds in the Democratic race. Nor did it answer some of the key questions that will be at the heart of the campaigning in the weeks ahead. For Sanders, it is a question of whether he can expand his appeal from a largely white base of supporters and attract votes of African Americans and Hispanics.

For Clinton, it is whether she can retool her message to counter the enthusiasm behind Sanders’s candidacy.

Among the sharpest exchanges came over the role of money in the political system, with Clinton seeking to deflect criticism that she has benefited from contributions from Wall Street and financial institutions and Sanders suggesting that anyone who doesn’t think big contributions influence government actions isn’t being realistic.

“Let’s not insult the intelligence of the American people,” Sanders said.

“Why in God’s name does Wall Street make huge campaign contributions?” he asked rhetorically. “I guess just for the fun of it. They want to throw money around.”

With an eye to upcoming contests in Nevada and South Carolina, both used their opening statements to appeal to minority voters, who will play a far more significant role in those states than they did in Iowa and New Hampshire.

Clinton sought to put Sanders on the defensive early in the debate when he was asked how much more government would cost under a Sanders administration. When Sanders was told he had not answered the question, he said there of course would be a limit. He offered a ringing defense of his philosophy.

“In my view, the government of a democratic society has a moral responsibility to play a vital role in making sure all of our people have a decent standard of living,” he said.

Clinton answered the question Sanders was asked, saying that her best estimate of the price of his plans would raise the cost of government by 40 percent. She then pivoted to an attack on his call for a Medicare-style, single-payer health-care system.

Sanders said again that middle-class Americans would pay about $500 more in taxes for his government health-care plan but would save about $5,000 in health-care costs.

Clinton, calling that “a promise that can’t be kept,” said, “Based on every analysis that I can find by people who are sympathetic to the goal, the numbers don’t add up, and many people will actually be worse off than they are right now.”

Sanders shot back, “That is absolutely inaccurate.” But Clinton continued to press her case.

When Clinton was asked what her proposals would cost, she priced them at about $100 billion a year, all of which she said were paid for by tax increases. “And I think once I’m in the White House we will have enough political capital to be able to do that.”

To which Sanders caustically replied, “Well, Secretary Clinton, you’re not in the White House yet.”

Clinton’s challenges appealing to women voters came under the spotlight. In New Hampshire, Sanders carried women voters by 11 points. Clinton was hardly helped when, during a campaign event, former secretary of state Madeleine Albright scolded younger women who didn’t support Clinton by using an oft-repeated line: that women who don’t support each other are destined to a “special place in hell.”

Asked whether she agreed with Albright, Clinton said: “I think that she’s been saying that for as long as I’ve known her. It doesn’t change my view that we need to empower everyone, women and men, to make the best decision in their minds that they can make.”

With three women on the debate stage – Clinton and debate moderators Judy Woodruff and Gwen Ifill, co-anchors of the PBS NewsHour – Sanders was outnumbered, as Clinton noted with a smile: “We’ll take all the progress wherever we can find it.”

Clinton also nodded to her endorsements from abortion rights women’s health groups such as Planned Parenthood as evidence that she was deemed the superior candidate on health issues that are important to women.

But Sanders declined to take the bait, instead training his fire on Republicans, whom he accused of hypocrisy when it comes to government’s role. “By the way,” he said, “when it comes to a woman having to make a very personal choice, ah, in that case, my Republican colleagues love the government and want the government to make that choice for every woman in America.”

With the South Carolina primary looming at the end of the month, both Clinton and Sanders highlighted need to reform the criminal justice system. Their tone was far less acrimonious than the sharp rhetoric coming from Clinton’s African American surrogates this week, who accused Sanders of being “absent” on these and other issues that are important to black voters.

“We need fundamental police reform, clearly, clearly, when we talk about a criminal justice system,” Sanders said. “I would hope that we could all agree that we are sick and tired of seeing videos on television of unarmed people, often African Americans, shot by police officers.”

Clinton, who had invited the mother of a young black, mentally ill man who was killed by police as her guest to the debate, added that reforms needed to go beyond the justice system.

“I completely agree with Senator Sanders,” Clinton said. “When we talk about criminal justice reform, and ending the era of mass incarceration, we also have to talk about jobs, education, housing and other ways of helping communities.”

The debate came just two days after Sanders won a decisive victory over Clinton in the New Hampshire primary. Sanders’s 22-point margin was one of the largest in the history of non-incumbent presidential primaries in the Granite State.

The New Hampshire results reset the Democratic race, putting pressure on both candidates as they look to the next two contests – the Feb. 20 Nevada caucuses and the Feb. 27 South Carolina primary.

For Clinton, the huge margin in New Hampshire brought new concerns about weaknesses in her candidacy. The former secretary won the Feb. 1 Iowa caucuses, but by less than a percentage point. Her defeat in New Hampshire can only be described as a drubbing and, despite energetic campaigning, she appeared to have made up no significant ground in the final days – unlike in 2008 when she scored a come-from-behind victory over then-Sen. Barack Obama.

Clinton remained out of public sight after the resounding loss to Sanders in New Hampshire, but her campaign whirred into action. Campaign officials announced a slew of new endorsements among African American leaders and deployed them in an aggressive campaign to discredit Sanders’s record on civil rights issues important to African American voters

“I never saw him. I never met him,” Lewis said. “I was chair of the Student Nonviolent Coordinating Committee for three years, 1963 to 1966. . . . I met Hillary Clinton. I met President Clinton.”

The Clinton campaign has turned its focus squarely on African American voters, who constitute more than 55 percent of the Democratic electorate in South Carolina and who, polls show, overwhelmingly support her.

Meanwhile, in Nevada, where Hispanic, African Americans, and Asian and Pacific-Islander voters made up 35 percent of the Democratic electorate in 2008, Sanders is gaining ground. Despite having established a campaign in Nevada since early summer 2015 – months ahead of Sanders – Clinton’s aides have begun playing down expectations for the state, suggesting that the demographics of the likely caucus electorate still favor Sanders.