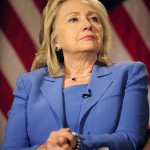 Former Secretary of State Hillary Clinton said that Hamas ultimately bears the “responsibility” for the civilian casualties in Gaza.

In a wide-ranging interview conducted by The Atlantic’s Jeffrey Goldberg with the potential 2016 Democratic hopeful, Clinton harshly criticized Hamas for starting the conflict and placing civilians in harm’s way by “embedding rockets and command-and-control facilities and tunnel entrances in civilian areas.”

“There’s no doubt in my mind that Hamas initiated this conflict and wanted to do so in order to leverage its position,” Clinton said.

In referencing the civilian casualties in Gaza, Clinton said that all democracies, including the United States, have made mistakes that resulted in civilian deaths.

“I don’t know a nation, no matter what its values are-and I think that democratic nations have demonstrably better values in a conflict position-that hasn’t made errors, but ultimately the responsibility rests with Hamas.”

Clinton also blamed anti-Semitism for the disproportionate amount of protests and negative attention Israel is receiving in Europe and elsewhere.

“You can’t ever discount anti-Semitism, especially with what’s going on in Europe today. There are more demonstrations against Israel by an exponential amount than there are against Russia seizing part of Ukraine and shooting down a civilian airliner. So there’s something else at work here than what you see on TV.”