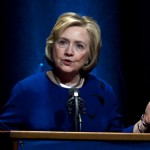 Hillary Clinton is certainly not shying away from controversial topics as she nears a likely presidential run. The former Secretary of State spoke out in support of President Obama’s decision to exchange five Guantanamo detainees for America’s lone POW, Bowe Bergdahl.

Many Republicans have accused the president of caving to terrorists, trading top Taliban members that the Pentagon had opposed releasing. Others have raised concerns that Bergdahl was a deserter.

Clinton defended Obama’s decision as honoring the nation’s military legacy. “This young man, whatever the circumstances, was an American citizen-is an American citizen-was serving in our military,” said Clinton at an event in Colorado promoting her latest memoir, Hard Choices. “The idea that you really care for your own citizens and particularly those in uniform, I think is a very noble one.” Read more at ABC News.