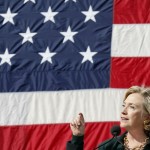 Hillary Clinton says there’s a pretty simple explanation for why she never appears to sweat: She’s a robot who’s “not even a human being.”

“I was constructed in a garage in Palo Alto a very long time ago,” a laughing Clinton told Heben Nigatu and Tracy Clayton, hosts of BuzzFeed’s “Another Round” podcast, on Sunday. “People think that, you know, Bill Gates and Steve Jobs, they created it. Oh no. I mean a man whose name shall remain nameless created me in his garage.”

When asked if there were more Clinton-bots in existence, the Democratic presidential front-runner quipped, “I thought he threw away the plans, at least that’s what he told me when he programmed me — that there would be no more.

“I’ve seen more people that kind of don’t sweat, and other things, that make me think maybe they are part of the new race that he created: the robot race,” Clinton added.

The confession came after Clinton was questioned about her lack of perspiration. First chalking up her sweat-free façade to years of experience under hot studio and stage lights, the 67-year-old former secretary of State then revealed her deodorant preference: “Solid block. I like the solid. Solid block is much better.”

Clinton said the fact that she doesn’t sweat is “the weirdest thing” about her.