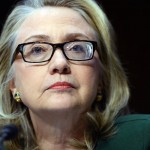 “The family of Laquan McDonald and the people of Chicago deserve justice and accountability,” she said in a statement released Wednesday.

“All over America, there are police officers honorably doing their duty, demonstrating how to protect the public without resorting to unnecessary force,” Clinton continued. “We need to learn from and build on those examples.

“The loss of so many young African-Americans taken too soon should reaffirm our commitment to press forward for progress,” the former first lady added.

Van Dyke was charged with first-degree murder in connection with McDonald’s death.

Clinton argued Wednesday that the series of events is an opportunity for addressing the nation’s relationship between law enforcement officials and minority communities.

“As criminal charges proceed in this case, we also have to grapple as a country with broader questions about ensuring that all our citizens and communities are protected and respected,” she said.

“The mothers I met recently in Chicago are right: We cannot go on like this,” the Democratic White House hopeful added. In early November, Clinton met with the mothers of several African-American parents whose children have died in shootings.