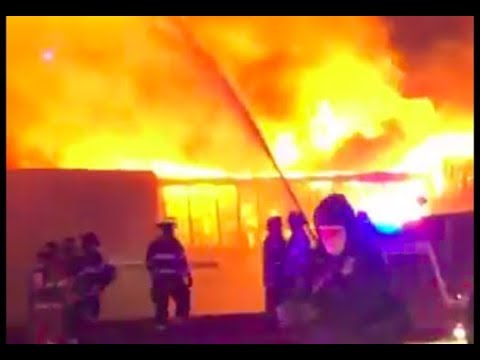 A massive fire tore through a paper factory in New Jersey on tonight amid freezing temperatures that caused the blaze to swell, NBC News reports.

Emergency responders received 911 calls just after 5 p.m. about a fire at the Marcal Paper Mills in Elmwood Park. Two hours later, it was designated a seven-alarm fire and firefighters had to be pulled from the building as the roof collapsed, Elmwood Park Police Chief Michael Foligno.

“The wind is not helping and the cold — it’s causing the fire to spread rapidly,” Foligno said. “We have at least 10 other towns here with their fire departments helping us fight the fire.”

No injuries have been reported.

Rob Baron, president and CEO of Soundview Paper Company, which owns the mill, said in a statement that none of the approximately 200 employees who were working at the mill when the fire broke out were injured, NBC New York reported. “The full extent of the damage to our facility is not yet known, but we know the impact will be incalculable to the lives of our dedicated workers and our business as a whole,” Baron said in the statement, according to the station.

Baron called the fire “devastating,” and said “our top priority in the coming days and weeks will be to support our associates at Marcal whose lives will be directly impacted by this disaster.”