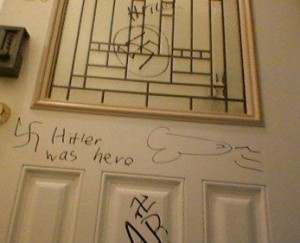 An international Jewish NGO expressed profound concern over a case of antisemitic vandalism in Brooklyn, NY.

The Anti-Defamation League (ADL) was responding to an incident that took place in a three-story building in Bedford-Stuyvesant, occupied by Satmar Chassidim. Swastikas, the words “Hitler was a hero” and the drawing of male genitalia were scrawled on the front door of the edifice.

The graffiti was discovered on Shabbos morning by the 21-year-old occupant of the second-floor apartment.

An NYPD spokesperson said the 21-year-old resident told police that on Friday night someone rang the second-floor bell of the home, banged on the building’s main door and shouted profanities, DNA Info New York reported. None of the building’s residents took action, but the following morning, the young man discovered the antisemitic graffiti. He informed police of the vandalism after Shabbos. The New York Police Department is investigating the incident as a hate crime.

“It is deeply troubling when individuals are targeted, harassed or persecuted for their religious beliefs,” he said in a statement. “We continue to urge community leaders across the board, as well as our elected officials, to make their voices heard in denouncing such appalling acts of hate.”

The three Satmar families living in the building have been harassed repeatedly since moving in about a month ago. The previous harassment reportedly included someone banging on the door of the home and yelling, and deliveries of Chinese food and pizza that the residents did not order, with requests for payment.

“Most people on the block are very friendly,” Yehuda Kohn, who said he performed contracting work for the building’s owner, told DNA Info New York. “But this weekend someone took it to the next level.”