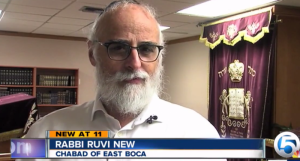 A 19-year-old bochur was attacked in Boca Raton, Florida on Shabbos by a man who said Jews belong in concentration camps and that “Hitler was right.”

According to WPTV Channel 5, the unnamed student was walking on 2nd Avenue when a man rode by on a bicycle and said, “Jews should go back to Auschwitz. Hitler was right.”

The student reportedly responded, “Why don’t you come back here and say that?”

The man on the bike rode up to the student and repeated his statement. Blows were exchanged and the student was knocked to the ground, striking his forehead on the pavement before his attacker rode away.

“I’m doing better. It was just a little bit nerve-wracking having someone scream at me these things,” the student told Channel 5. He is studying to become a rabbi at Boca Raton’s Chabad Center.

“I think the community is a very great community, a very welcoming community,” the student said by phone. “And I think this was definitely a one-time incident.”

Chabad’s Rabbi Ruvi New said this type of harassment is a new and disturbing development in their normally peaceful community.

“We are in disbelief. Shock. Could this really happen in Boca Raton?” New said.

The suspect in the attack is described as a “white male, about 20 years old, 6′ feet tall, 160 pounds with blonde or light brown hair in a crew cut style and no facial hair. The suspect was wearing a light yellow shirt, navy jeans and dark shoes. He was riding a dark blue Schwinn mountain bike.”