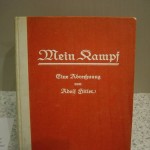 Copies of Adolf Hitler’s notorious “Mein Kampf” went on sale in Germany this week after the book’s copyright expired Jan. 1, meaning the work has entered the public domain.

A version of the book that was annotated by the Institute of Contemporary History of Munich is now on sale in the country for 59 euros ($65). The institute argues that the annotations will serve to place the book in the proper historical context by asking and remarking on such questions as, “How were his theses conceived? What objectives did he have? And most important: which counterarguments do we have, given our knowledge today of the countless claims, lies and assertions of Hitler?”

The president of Germany’s Jewish Council, Josef Schuster, told the NDR broadcaster that he welcomes the republication of the book because it might “undo the myth of this book” and show how “completely wrong and ridiculous Hitler’s theories and theses were.”

But the leader of the Jewish community in Munich, Charlotte Knobloch, said she cannot imagine seeing “Mein Kampf” displayed in stores.

The president of the World Jewish Congress, Ronald Lauder, told AFP that Holocaust survivors might be “offended by the sale of the anti-Semitic work in bookstores again.” In a statement, he also questioned the need for an annotated version.

“’Mein Kampf’ should have been properly studied 90 years ago. Hitler’s lies should have been rebutted back then…I don’t see the need for a critical edition. Unlike other works that truly deserve to be republished as annotated editions, ‘Mein Kampf’ does not. Already, academics, historians and the wider public have easy access to this text. Yes, ‘Mein Kampf’ should be studied, and it is appropriate to teach German students about this book and the terrible impact it had,” Lauder said.