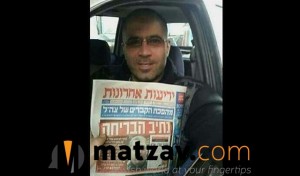 A photo of the escaped suspect in last week’s terror attack in Tel Aviv, smiling and brandishing a newspaper with his own his photo, caused a storm on social media on Thursday, with commentators aghast at the insolent taunt by a fugitive killer. There was only one problem — the man in the photo was not the suspect at all.

The man, identified by Ynet news as garage manager Amer Fadilia of Tira, said he had been giving a car its annual inspection in Kfar Saba when a man he knew at the inspection center asked to take his picture with the paper.

“I said to him ‘No, I shouldn’t, I shouldn’t.’ He told me, ‘This is just for us, for kicks,’” Fadilia recounted. “Later I saw my picture had spread on Whatsapp and Facebook, and I was very surprised.”

Fadilia said he was considering filing a complaint with police over the incident.

“I also work in Magen David Adom and the Fire Department and this really disturbs me,” he said. “Look what happened because of nothing. I called the man who took my photo and he cried to me. He doesn’t know what to do, he didn’t intend for it to go so far.”

The incident underscored the frequent unreliability of social media reports, where unvetted claims can often spread like wildfire before anyone checks their veracity.

The suspect in the Tel Aviv attack is 29-year-old Nashat Milhem, who is believed to have killed two people at a Tel Aviv bar last Friday, before going on to murder a cab driver whose taxi he hailed to make his escape.

Police allege Milhem opened fire with a submachine gun at the Simta Bar on Tel Aviv’s central Dizengoff Street on Friday afternoon, killing 26-year-old Alon Bakal and 30-year-old Shimon Ruimi and injuring seven others. He then allegedly fired into two other establishments, fled the scene on foot, hailed a cab, and rode to north Tel Aviv, where he killed the driver, 42-year-old Amin Shaaban, before abandoning the vehicle.

Haifa Magistrate’s Court on Thursday remanded Milhem’s father Mohammed for three additional days, on suspicion of being an accessory to the murder, and of obstructing the investigation.