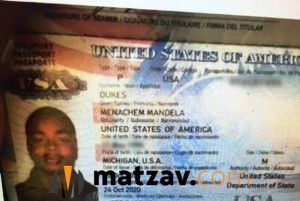 A story that went viral on social media about a police officer supposedly born after a blessing from the Lubavitcher Rebbe was proven to be a hoax.

The story being shared involved a couple from Brooklyn who were said to have been pulled over by a Puerto Rican police officer for a minor traffic violation.

The officer was said to have related that his father was a taxi driver in Brooklyn for many years and had received a dollar and blessing from the Rebbe for a child and in gratitude, he named his son Menachem Mendel after the Rebbe.

The story was shared along with a passport photo of a man with the name Menachem Mandela Dukes.

The story was widely shared by many on social media, until it reached Dvorah Z, who contacted COLlive to say that she was the one who had taken the photo, and he was not named after the Lubavitcher Rebbe, but after Israeli Prime Minister Menachem Begin.

“I work in Roseville, CA. I saw this kid in my store and he asked me where I am from because of my accent. I told him I’m from Israel so he said that his name is Menachem…he wasn’t sure why, but his brother said he’s named after Menachem Begin,” she said. “I took the photo of the passport to share with my family,” she said.

Screenshots of what appears to be a conversation between a “Menachem Mazarati Dukes” and an anonymous individual also began making the rounds on social media, where he claimed he was the person in the passport photo, but the story about the “blessing from a Rabbi in Brooklyn” isn’t true.

“My parents named me Menachem Mandela and my twin Shaka Anwar…” the person wrote. “Menachem Begin and Anwar Sadat signed a peace treaty in 1978 for peace in the Middle East winning them a nobel peace prize. Nelson Mandela and Shaka Zulu are Zulu names, thus binding us brothers,” he wrote.

Lightstone related that Dukes had told him as well that he was named after Menachem Begin and Nelson Mandela.

“He is not a police officer, he works at a school here in the city,” he related.

Lightstone says there’s a lesson to be learned from all this, advising readers to remember, “just because you read it online, doesn’t make it true.”

What was more disturbing, he said, was that someone would go through the trouble to fabricate the story.

“It simply boggles my mind that someone, somewhere, simply sat on Facebook or WhatsApp and just made up a story,” he said. “There are so many wonderful TRUE stories about the Rebbe. Powerful, inspiring, factually based events, why do we have to make things up?”