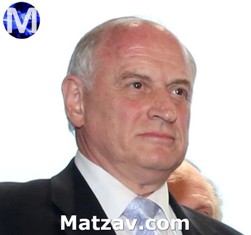 The Iran nuclear deal was not a signed treaty and therefore “the next president might not be bound by the deal,” Malcolm Hoenlein, the executive vice chairman of the Conference of Presidents of Major American Jewish Organizations, says, noting that polls showed that 80% of the public was opposed.

Hoenlein says that it was not right to frame the deal as a defeat for the pro-Israel community in the U.S., since the debate was not about Israel, and that America is also threatened by an emboldened Iran flush with sanctions relief money and able to fund its proxies around the globe.

Hoenlein notes that “Hizbullah people are in Mexico….Iran has weapons manufacturing plants in South America, all sorts of businesses, including one of the richest uranium fields, second only to Canada, in Venezuela.”

He adds that he has been told by people in the administration that the Middle East is not going to be the focus of President Obama’s final year. He said that while there have been disagreements with the Obama administration, “we also have to acknowledge there are a lot of good things between Israel and the U.S.” He said he has not seen any evidence that recent French moves regarding a Mideast peace conference were coordinated with Washington.