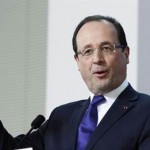 French President Francois Hollande on Friday evening called the attack on a kosher supermarket in Paris an “appalling anti-Semitic” attack.

In an address to the nation, the French president confirmed reports that four hostages were killed at the Hypercasher supermarket, located in Porte de Vincennes on the edge of the city.

Hollande called for national unity and said the country should remain “implacable” in the face of racism and anti-Semitism, according to Reuters.

“It is indeed an appalling anti-Semitic act that was committed,” he said of the hostage-taking by an Islamist gunman at the kosher supermarket.

Before his address to the nation, Hollande spoke to Israeli Prime Minister Bibi Netanyahu.

Netanyahu asked Hollande to maintain a reinforced level of security at Jewish institutions in France.

“Israel offers you all the help that France needs,” Netanyahu said. “The international community must unite in action against extremist Islamic terrorists and against those who support them.”