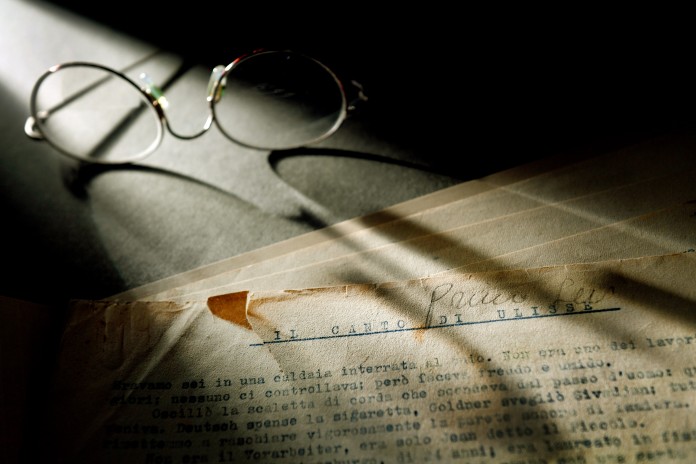 Manuela Paul had the precious documents in a plastic folder, inside an artist’s satchel, inside a Whole Foods shopping bag, which she kept at her side the entire bus ride from New York to Washington.

The package in her custody was a rare 1946 draft of one of the most revered books to come out of the Holocaust — Italian author Primo Levi’s classic memoir of his 10 months in the Nazi concentration camp at Auschwitz.

And when Paul and her sister, Eva Yona Deykin, arrived at the U.S. Holocaust Memorial Museum last month with Levi’s signed and edited draft, they were greeted by a delegation of grateful officials.

On Wednesday, the museum unveiled the partial manuscript of “Survival in Auschwitz,” which Levi wrote shortly after his return from the camp and is a wrenching and eloquent account of the horrors there.

The typewritten draft appears to be a copy, in Levi’s native Italian, with his edits in red and signature in pencil.

“Survival in Auschwitz” is considered one of the great Holocaust books, along with “The Diary of Anne Frank” and Elie Wiesel’s concentration camp memoir, “Night,” the museum said.

The manuscript includes 10 of the eventual 17 chapters, dating from the winter and spring of 1946. Levi had been liberated by the Russians in January 1945. He died in 1987.

The manuscript was donated to the museum by Paul and Deykin, of Brookline, Massachusetts, who were given it by their mother, the late Anna Foa Yona. She was a close second cousin to Levi and had fled fascist Italy with her family to the United States in 1940.

Levi was having trouble finding an Italian publisher for his book and hoped his cousin might find an American publisher. She tried, and failed, but kept the manuscript copy.

The sisters said in interviews that they were getting on in years and wanted to put the historic manuscript in a place that would care for it.

They first approached the museum in December and delivered the draft May 20, said museum curator Kyra Schuster.

“This was really one of the first published memoirs of a survivor’s experience that really talked about the camps,” Schuster said Wednesday.

“He describes . . . an ugly situation incredibly beautifully,” she said. “But it’s also very matter of fact. It’s not very metaphorical and philosophical. It’s like: ‘This is what happened. This is what we had to do to survive.’ ”

Levi, who was a trained chemist from Turin, was a member of a ragtag Italian resistance group when he was captured by a fascist militia on Dec. 13, 1943. He was 24.

In February 1944, he was crammed aboard a freight train bound for Auschwitz from Fossoli, Italy. Levi writes about this in his first chapter, “Il Viaggio,” or “the journey.” The manuscript includes four pages of this chapter.

“The climax came suddenly,” Levi wrote in the English version of the book about the arrival in Auschwitz.

“The door opened with a crash, and the dark echoed with outlandish orders in that curt, barbaric barking of Germans in command,” he wrote. “A dozen SS men stood around, legs akimbo, with an indifferent air.”

Levi goes on to catalogue months of inhuman cruelty. In the chapter “Sul Fondo,” or “on the bottom,” he wrote:

“Imagine now a man who is deprived of everything he loves . . . his habits, his clothes . . . everything he possesses: he will be a hollow man, reduced to suffering and needs, forgetful of dignity and restraint.”

The manuscript includes seven pages of that chapter.

Levi survived the camp when he was stricken with scarlet fever and was left behind when the Nazis evacuated it in 1945. He recovered and reached home several months later.

“When Primo Levi returned from Auschwitz . . . this story literally poured out of him,” Deykin, one of the donors, said in a telephone interview Tuesday. “He would talk about Auschwitz and his experience there with anyone who would listen to him.”

“He was so overwhelmed by what had happened to him,” she said. “He was just bursting with wanting to tell people.”

Levi tried in vain to find an Italian publisher. “The war was over,” Deykin said. “No one wanted to review again the horrors of the war. [Publishers] didn’t think it would be successful publication.”

He sent it to Deykin’s mother, who translated part of it, but couldn’t find a willing publisher. Afterward, “my mother kept these chapters in a file cabinet,” she said.

Later, Deykin had the manuscript, and then gave it to her sister, who stored it in a cabinet in the study in her home.

The book was eventually published in Italy in 1947 and was translated into English and published in the United States in 1959. An earlier Italian title is translated, “If This Is a Man.”

Deykin said she met Levi when he visited the United States in the 1980s. “He struck me as quite a charismatic man,” she said.

The sisters worried about the future of the fragile draft. “We decided that we wanted to find a place that would be equipped to take care of it,” Deykin said.

By the time they arrived with the manuscript, word had spread among the museum staff that it was coming. Many people wanted to be present for the handover, Schuster said.

“His words have moved us because they’re so beautifully written,” she said. Many colleagues have said the book launched their interest in Holocaust studies, she said.

Schuster said her favorite part of the book is “Il Canto di Ulisse,” the “Canto of Ulysses.” The draft includes four pages from the chapter.

In it, Levi recounts trying to teach Italian to a fellow prisoner, who speaks French.

Amid his squalor, Levi tries to remember elegant verses he had once memorized from “Dante’s Inferno” to teach his friend. The verses come with difficulty, but he finally recalls them, and recites them.

“As if I also was hearing it for the first time,” he wrote. “Like the blast of trumpet, like the voice of God. For a moment, I forget who I am and where I am.”