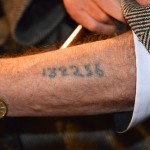 Two elderly Holocaust survivors in the Netherlands were brutally beaten and robbed in an apparent anti-Semitic attack.

The victims—Diana Blog, 86, and her husband Shmuel, 87—were beaten last month but only this week started to speak to the media about the incident. They already had scars from being attacked by Auschwitz concentration camp guard dogs.

Two masked men, apparently of Middle Eastern descent, posed as police officers in order to gain entry to the couple’s home in Amsterdam. They subsequently beat the couple viciously, ransacked their home, and stole $15,000 worth of jewelry and money. The men also called the couple “dirty Jews.”

Diana was severely bruised from the attack, while Shmuel lost his vision and broke his thigh bone. Both Diana and Shmuel are now wheelchair-bound.

“I have extreme pains,” Diana told Yediot Achronot. “They wanted to chop off my finger because the rings didn’t come off fast enough. They called us ‘dirty Jews’ and said: ‘You don’t need your jewelry anymore. You’ve been wearing it for too long. Now it’s all ours.'”

The couples’ son Emmanuel has offered an award of $11,000 to anyone with information about the robbers.

“This is a shocking incident, a brutal robbery that extremely affected the victims,” the Dutch Embassy in Israel said in a statement. “In general, it’s important to emphasize that everyone should feel safe in the Netherlands. We will not tolerate any incident of discrimination and anti-Semitism.”

“I don’t feel like eating anymore,” Diana told the Dutch Nieuw Israelietisch Weekblad (New Israelite Weekly), explaining that she could still taste the barbiturate the robbers had forced her to drink at gunpoint.

“I am broken from the inside,” she said.