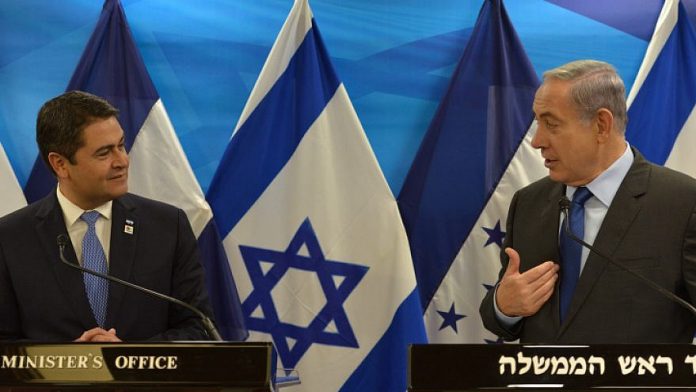 Honduras will hold talks with Israel, joined by the United States, aimed at opening an embassy in Jerusalem, the countries said on Tuesday, as the small Central American nation looks to follow US President Donald Trump’s controversial move.

US Secretary of State Michael Pompeo, Israeli Prime Minister Benjamin Netanyahu and Honduran President Juan Orlando Hernandez held a meeting in the Brazilian capital on the sidelines of the inauguration of right-wing Brazilian President Jair Bolsonaro

The three agreed to hold meetings in the capitals of each country “to advance the decision process to open embassies in both Tegucigalpa and Jerusalem,” as well as “strengthen political relations and coordinate development cooperation in Honduras,” the countries said in a joint statement.

The right-leaning Hernandez is the latest leader to consider following Trump’s decision to move the US embassy from Tel Aviv to Jerusalem, which infuriated Palestinians and drew international condemnation.

Trump has repeatedly threatened to cut off aid to Honduras, a poor nation of less than 10 million people, over caravans of migrants crossing Mexico heading for the US border.

Guatemala, another country seeking closer US ties, quickly joined Trump’s decision and moved its embassy to Jerusalem just two days after the US opened offices in May. Paraguay also followed, but a new government backtracked in September.

Netanyahu said on Sunday that Bolsonaro told him it was a question of “when, not if” Brazil would move its embassy in Israel from Tel Aviv to Jerusalem.