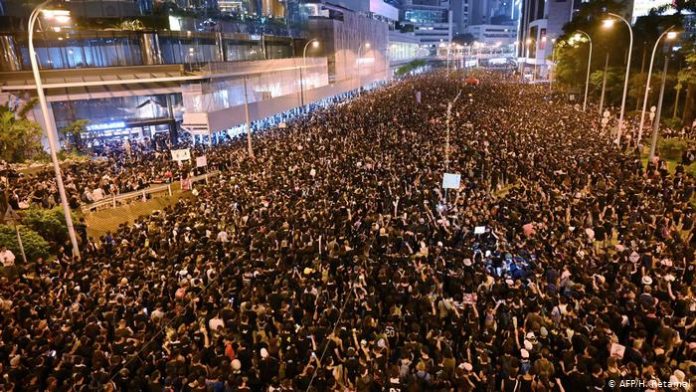 Thousands of demonstrators again blocked main city thoroughfares on Friday and, in a new show of displeasure, surrounded police headquarters, demanding that a deeply unpopular extradition bill be fully withdrawn by the city’s leader and police investigate cases of alleged abuse by officers.

For over a week protesters have taken to the streets of the semiautonomous territory calling for the scrapping of a bill that would allow for case-by-case extraditions to mainland China. The continued upheaval has placed Carrie Lam, the pro-Beijing chief executive, at the center of the most serious crisis of her political career.

Lam has suspended the bill, and offered up two public apologies, but has refused to withdraw the legislation completely. Her apologies have been dismissed as self-serving and many continue to demand that she resign.

Government offices in downtown were closed Friday in anticipation of the rallies.

Friday’s protests were originally organized by the student unions of Hong Kong universities but gathered support online and through messaging apps popular with younger demonstrators. Student leaders had given the government until 5 p.m. local time on Thursday to respond to a list of four demands.

In addition to the withdrawal of the bill and a police misconduct investigation, they also want charges against those arrested during past protests to be dropped and the retraction of references to the June 12 protest as a “riot.”

So Tsun-fung, the president of the student union of the Chinese University of Hong Kong, said that students were disappointed and angered by the government’s response. “We need to put more pressure on the government,” he said.

While some have questioned the wisdom of the latest protest coming less than a week after some 2 million people took to the streets, but So said they needed to maintain momentum. “If we wait, it will be too late,” he said.

Harcourt Road, a major motorway through Hong Kong’s central district has been a focus of past demonstrations, including last week’s occupation which ended with police firing tear gas and rubber bullets at protesters.

By Friday, the crowds blocking it had thinned considerably from earlier in the week. Demonstrators’ anger is now mainly directed toward the police. In recent days, videos of officers arresting protesters and firing tear gas have been shared widely on social media, eliciting outrage.

Artwork depicting the police violently confronting protesters has popped up around the city, as have groups projecting videos of the incidents onto screens in public.

Sonia, 18, who asked to be identified by just one name, said that she was frustrated with police dismissing the complaints of young people and telling them to submit their grievances by email.

“We are all very angry about it,” she said. “The people who the police hurt are young people and students. They are vulnerable citizens.” Like many in attendance, she had obscured her face with a dental mask.

Protesters taped photos of police firing tear gas and injured demonstrators to the police complex. Others blocked a police van in the road, surrounding it with traffic cones so it was unable to move.

With temperatures in the high 80s and stifling humidity, many took refugee in the shade of underpasses and stuck cooling patches to their foreheads. Officers stood in a line blocking the front door. One officer filmed protesters with a hand held camera.

The Hong Kong police, which has previously defended its actions, said that the gathering would “seriously affect the emergency services provided by police,” in a post on Twitter. “Police now appeal to protesters to express their views in a peaceful and rational manner and stay safe.”

Joshua Wong, who rose to prominence as a leader of the 2014 Umbrella Movement and was just released from prison, addressed the crowd and called for police commissioner Stephen Lo to meet with protesters to hear their grievances.

Wong was absent from mass demonstrations of the past month because he was serving a jail term for charges stemming from the 2014 protests during which demonstrators paralyzed major roads in a 79 day occupation of central Hong Kong calling for universal suffrage.