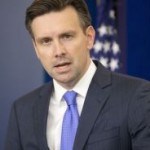 White House spokesman Josh Earnest on Friday said the Obama administration would “welcome” a quicker resolution to the Islamic State problem, but nevertheless, “we’re seeing important progress as a result of the strategy that the president laid out.”

Earnest made the comment just hours before the terror attacks in Paris, which the French president has blamed on the Islamic State. Just hours before Earnest spoke, the Obama administration announced that a notorious Islamic State fighter had been targeted and was presumed dead in Syria.

“Is the president pleased with the pace of the anti-ISIL effort since he announced it on September [10], 2014?” a reporter asked Earnest at Friday’s White House briefing.

“I think it’s fair to say that the — that everybody who’s paying any attention to this, and I think this is probably the — includes the vast majority of Americans, would like to see this be moving faster,” Earnest responded.

“But the fact…that it’s not (moving faster) is a reflection of the president’s conclusion that the United States cannot merely impose a military solution on the problems that are plaguing Iraq and Syria; that ultimately, what the United States can do and must do is build the capacity of the central government in Iraq and build the capacity of the Iraqi security forces to protect their own country. And they’ve obviously got a lot of work to do.

“In Syria, the situation is a little bit different. We don’t have a central government with whom we can coordinate. We have to rely on trying to build the capacity of local fighters and looking for organizations with whom we can work to take the fight to ISIL on the ground.

“But I think that the point here is simply that anytime you see these kinds of conflicts, you want them to be resolved more quickly, primarily because we know that there are lives being lost and certainly millions of innocent lives that are being disrupted as people flee violence from Syria.

“So if it could be more — resolved more quickly, we certainly would — would welcome that, but I also think at the same time, there’s no denying that the — that we’re seeing important progress as a result the strategy that the president has laid out.

The reporter followed-up: “So by and large, the president thinks this effort is going about as well as it reasonably could be expected to go?”

“Well, I think that — noting that there will be periods of progress and periods of setback, I think there’s no denying that important progress has been yielded,” Earnest said. “But we sure have a long way to go when it comes to ultimately achieving our goal of degrading and ultimately destroying ISIL, but also trying to address the underlying political challenges that have plagued both Iraq and in Syria.”

“Last question,” the reporter said. “Is it safe to say that when it’s all said and done, and when he’s writing his memoirs in his future, Barack Obama’s going to look back on Syria and say, the way his administration handled this conflict was the worst set of decisions he made — the greatest blemish on his presidency — the equivalent of Rwanda was for Bill Clinton?”

“No, I don’t think that that’s — will be his conclusion,” Earnest said. “I do think that former President Obama is likely to be in a situation where he writes that Syria was one of the most challenging foreign policy situations that his administration had to confront, but that we succeeded in doing so, mindful of the lessons of the recent history. And mindful of the need to ensure that the national security of the United States aren’t just protected, but advanced.

“And as difficult as this scenario has been, I think our efforts with regard to Syria thus far, would pass those two tests. OK?”

In announcing his anti-ISIS strategy in September 2014, President Obama warned that, “If left unchecked, these terrorists could pose a growing threat beyond that region, including to the United States.”

He noted that “ISIL leaders have threatened America and our allies. Our Intelligence Community believes that thousands of foreigners -– including Europeans and some Americans –- have joined them in Syria and Iraq. Trained and battle-hardened, these fighters could try to return to their home countries and carry out deadly attacks.”