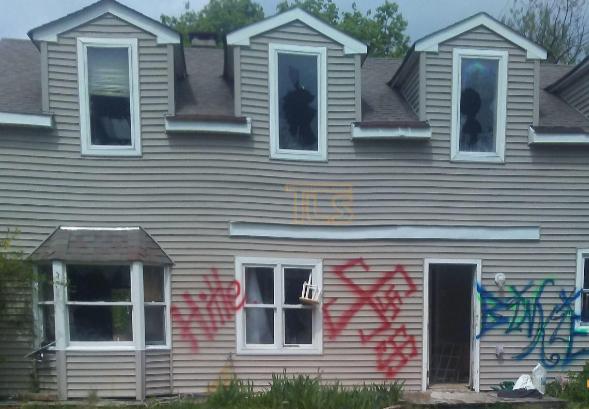 An unoccupied in Jackson, New Jersey, has been vandalized with anti-Semitic slogans.

Residents in the neighborhood woke up to find the home spray painted with a swastika and the word Hitler, along with other antisemitic phrases and symbols.

The Jackson Police Department is investigating a bias incident involving burglary and criminal mischief which occurred at a property in the Township.

On Wednesday April 30, 2019 at approximately 2:50 pm, officers responded to a property located on Valley Road on the report of anti-Semitic graffiti being found. The location was an unoccupied/abandoned house located approximately 400 feet from the road on a wooded, 10 acre property. The house was reportedly scheduled to be demolished later this week.

Officers observed that the windows of the house had all been broken and that there were swastikas spray painted on the exterior of the residence along with the word, “Hitler”. Upon entering the house, extensive damage was discovered including all windows being broken and damage to the sheetrock walls. Additionally, there were multiple areas on the interior where profanity was spray painted on the walls along with additional derogatory remarks directed towards those of the Jewish faith and African Americans. There was a second abandoned structure on the property that was not affected.

It is suspected that the damage was done between April 19th and April 30th. During a neighborhood canvas, a resident reported hearing noise in the area the previous evening but did not report it.