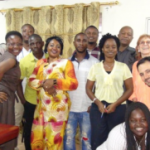 “Everyone thinks about the desperate needs that people have in the aftermath of a disaster,” said Dr. Judy Kuriansky, the New York based clinical psychologist whose work with the victims of conflicts and disasters has taken her all over the world. “They need safety, food, shelter and medical attention. But what’s becoming clear is that help for their psychological trauma is just as important, and is something that needs immediate as well as long-term attention.”

Despite being a well-known radio advice host and the author of several books on love and relationships, Kuriansky is not your textbook agony aunt. Throughout her long career, she has regularly swapped the comforts of a New York existence for lengthy spells in some of the globe’s most fraught locations, among them post-earthquake Haiti and post-tsunami Sri Lanka and Japan. She’s also spent significant time in Israel, working with survivors and relatives of victims of terrorist attacks.

These days, it’s the devastating Ebola epidemic in West Africa that’s at the center of her attention. Kuriansky and I spoke shortly after her return from Sierra Leone, where, as a consultant to the Israeli humanitarian NGO IsraAID, she’s been training local people to deal with enormous psychological problems that have accompanied the physical devastation wrought by the disease.

It’s hard to overstate the level of destruction in Sierra Leone, particularly when you recall that just fifteen years ago, the country emerged from a brutal civil war in which 50,000 people were killed and thousands more, particularly children, were subjected to gruesome war crimes. When it comes to the impact of the Ebola virus, Sierra Leone finds itself in the worst position in the region; according to the latest figures from the World Health Organization, nearly 11,000 people have contracted the virus, while more than 3,000 have died as a result.

“The challenges are vast, because so many aspects of the society have been decimated,” Kuriansky said. “The health problem has spilled over into huge economic and social problems.” On the psychological level, she added, mental health professionals are confronted with what Kuriansky calls the “three S’s” – the shame that comes with having the disease in the first place, the silence that prevents victims from openly talking about their suffering, and the stigma with which those merely suspected of having Ebola are subjected to.

“It’s very hard to find PhD psychologists in the affected countries,” Kuriansky explained, “so my work has involved training local people to be able to offer psychosocial support and empathy to the other people in the community.”

The mental and spiritual challenges here are vast, and everyone’s needs are distinct. Among the many individuals Kuriansky encountered on her recent trip was an adolescent boy forced to take care of his younger siblings after all his adult relatives perished, a trained nurse whose own daughter was infected by an Ebola patient she was treating, and a young man suffering from horrifying nightmares from having buried one too many corpses.

Imperative to recovering their mental health, Kuriansky observed, is the realization that victims can again feel safe and secure. “Anything that increases people’s sense of safety is critical,” she said, as she outlined a trust exercise she carried out at several workshops in Sierra Leone. Deceptive in its simplicity, one person leads another person with closed eyes around the room, before exchanging roles.

“So many people in Sierra Leone told me how much they have lost their trust,” said Kuriansky. “It’s essential to recover the feeling that you can rely on someone else to help you, and also to learn what it’s like to be responsible for the safety of another person.”

As chair of the Psychology Coalition of NGOs accredited at the United Nations and the main representative head of the International Association of Applied Psychology, Kuriansky has played a key part in getting mental health and well-being recognized by world governments at the UN as integral to the sustainable development goals now being set for the years 2015-2030. “There are seventeen goals, including ending poverty, achieving gender equality and combating climate change,” Kuriansky said, as she described the development agenda that the UN is in the process of adopting. “For the first time, promoting mental health is a target identified by governments around the world, and that’s significant and transformational.”

Kuriansky’s work in Sierra Leone has only served to deepen her conviction that treating the aftermath of wars and disasters requires a focus as much on the mind as on the stomach and the wallet – all of which makes her a natural partner for IsraAID, which launched its Psycho-Social Support (PSS) training program in Sierra Leone last September.

“IsraAID is taking the lead to have experts like myself with international experience in recovery and resilience to train local people in the districts, so that they are empowered to provide psychosocial support to children and families in their communities,” she said. When I asked her how local people reacted to an aid organization from Israel, a country they barely know from their daily lives, she answered emphatically, “Highly respected and welcomed!” Middle Eastern politics, Kuriansky underlined, is not on Sierra Leone’s radar screen: “The stigma is directed towards the virus not the people.”

Despite the dangers, Kuriansky plans to go back to Sierra Leone to see how the foundations she laid down on her visit have developed. She’s also just completed a song, “Hope is Alive,” which she recorded with local musicians and colleagues, among them IsraAID’s own Yotam Politzer.

“Now there is Ebola/ Threatening my nation/A silent killer with a mean spirit/To break us apart, to keep us apart/But we are survivors, so we will survive,” declares one verse, written by Sierra Leonean musician and Search for Common Ground NGO staffer, Emrys Savage. In those words, there is a message not just of hope, but defiance too. Moreover, Kuriansky does see the light emerging from “a very dark tunnel.”

“I learned in Haiti after the earthquake that you can build back better,” she said. After decades of war followed by Ebola, Sierra Leone is, according to Kuriansky, beginning to do just that, though it will be some time before the psychological wounds – “the anger, depression, and even the testing of faith,” as she describes it – finally and definitively heal.