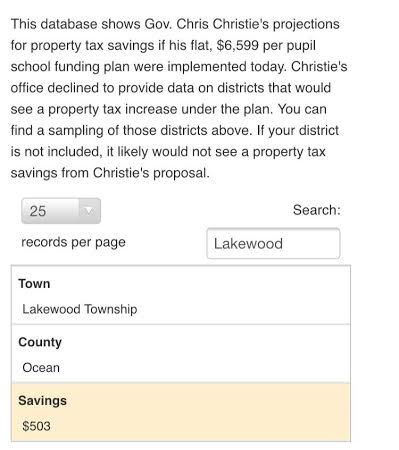 NJ Gov. Chris Christie’s proposed school funding overhaul could produce property tax relief from as much as $4,500 for the average homeowner in Glen Ridge to a little as $5 on average in Mount Ephraim, according to state data, NJ.COM reports.

Across New Jersey, 368 towns would see property tax reductions including 90 municipalities that would experience at least $2,000 in average household savings, according to an analysis released by the governor’s office.

Residents of Lakewood, NJ, could save about $500.

NJ.COM says that New Jersey’s poorest cities would not only lose millions in state aid for their schools but would be forced to consider raising the average property tax bill by thousands of dollars per household to offset the reduction. Passaic, which would see a 61 percent reduction in state aid to its schools, would need to raise the average tax bill by $12,385 to avoid potentially crippling budget cuts in its schools, NJ Advance Media found.