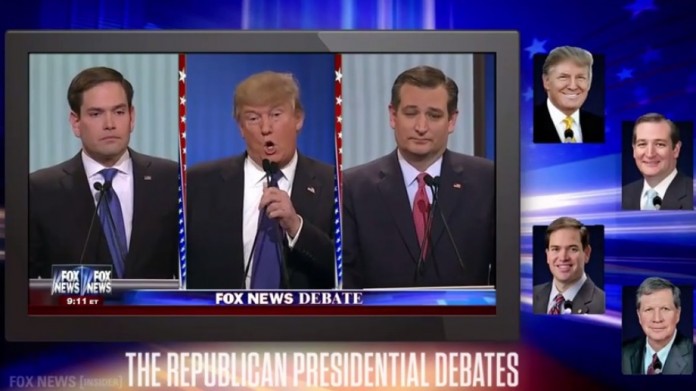 “Little Marco,” Donald Trump said, addressing the senator from Florida. It was a seminal moment.

This was supposed to be the day the establishment began to rein in Trump. The debate was down to only four candidates. And Mitt Romney entered stage right, delivering a speech in Utah denouncing Trump as a “phony,” a lousy businessman, a danger to America and a bigot to boot. “His promises,” Romney said, “are as worthless as a degree from Trump University.”

All of that may be true, but Romney was about the worst person to make the argument. Too little. Too late.

Romney chided Trump for not being a self-made man. This coming from the son of an auto company CEO, Michigan governor and cabinet secretary. A phony? Anyone who thinks Romney’s endless reversals on abortion, gun control and other issues were heartfelt needs to say so with a straight face. Romney is precisely the kind of governing conservative who has inspired the Tea Party’s revolt since 2010. Just ask John Boehner or Eric Cantor, the erstwhile leaders of the House of Representatives.

There’s a case against Trump, but Romney’s the wrong messenger, especially since he clearly wants an open GOP convention, where the party can anoint him as its savior. They’re more likely to turn to Jeb! Bush.

At the debate, Rubio and Kasich, the last bastions of the establishment, tried to attack Trump, and again they were unsuccessful. It wasn’t Trump’s best night. The 69-year-old flies in the day of debates and can look a little more fatigued than his younger competitors who spend the day at debate sites and rest up. Still, it was Trump’s night. Kasich’s genial style and moderate demeanor plays well with the press and the few centrist Republicans who still roam the Earth. But it didn’t damage Trump, although his “I won’t bite” retort to Chris Wallace’s effort to get him to declare Trump soft on Vladimir Putin was pretty great. Rubio didn’t fare much better. The mogul basically ignored his call to start making Trump ties in America. Rubio represents Palm Beach, but Trump silenced him on whether you need foreign labor to staff the short season at the posh resort. Cruz has his moments with his admonitions for Trump to “breathe” and “count to 10,” but they seemed more unctuous than cutting.

Megyn Kelly didn’t land a blow against Trump either. Her questions were smart: Shouldn’t he release his off-the-record discussion with The New York Times about immigration? No, Trump said, playing First Amendment lawyer. “I think being off the record is a very important thing,” he added. “I think it’s a very, very powerful thing.” Rubio rightly noted the decision to release is Trump’s and there’s no great principle at stake. But his pleading sounded like the off-camera voices of parents on the Peanuts. No one really listened.

This is not how you tame an insurgent. This is not how you quiet a revolution. There’s only one path: Convince Trump’s working class supporters that he doesn’t care about them. That’s why the “Trump University” complaint is so powerful. It symbolizes the idea that Trump is bilking the working class, not lifting them up. As long as he’s seen as outrageous in the service of America, egotistical on behalf of you, no one’s going to care where his ties are made or whether he releases some tape.

Forty years ago, Democrats tried to stop George McGovern’s anti-Vietnam War campaign. “Anybody but McGovern,” they declared. They tried to manipulate convention rules and rally around opposition candidates. But the establishment, which included then–Georgia Governor Jimmy Carter, saw their efforts backfire. McGovern sprinted to the convention and won the nomination. A similar thing happened in 1964 when the Republicans tried to stop the nomination of Barry Goldwater. It didn’t work. And it’s not working today. Romney, Rubio and the rest of them should take note.