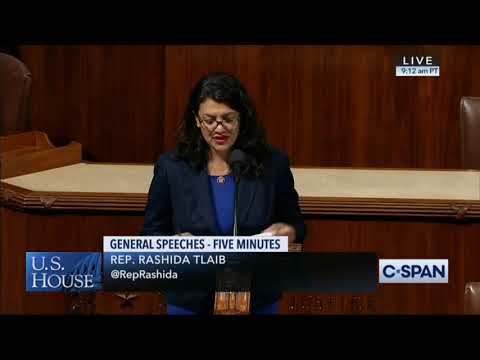 Tlaib, a Palestinian-American and a supporter of BDS, spoke on the floor about her opposition to a House resolution affirming opposition to the movement.  Tlaib said she could not stand by as the “daughter of Palestinian immigrants” and watch an attack on the right to “boycott the racist policies of the government and state of Israel.”

“The right to boycott is deeply rooted in the fabric of our country,” she said. “What was the Boston Tea Party but a boycott? Where would we be now without the boycott led by the civil rights activists in the 1950s and 60s like the Montgomery bus boycott and the United Farm Workers Grape boycott?”

“Americans boycotted Nazi Germany in response to dehumanization, imprisonment, and genocide of Jewish people,” she said. “In the 1980s, many of us in this very body boycotted South African goods in the fight against apartheid. Our right to free speech is being threatened with this resolution. It sets a dangerous precedent because it attempts to delegitimize a certain people’s political speech and to send a message that our government can and will take action against speech it doesn’t like.”