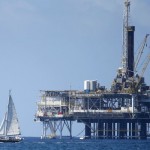 After more than a year of round-the-clock drilling, large amounts of oil have been found on the Golan Heights. Estimates are that the amount of oil discovered will make Israel self sufficient for very many years to come.

Afek Oil and Gas chief geologist Dr. Yuval Bartov told Channel 2 News, “We are talking about a strata which is 350 meters thick and what is important is the thickness and the porosity. On average in the world strata are 20-30 meters thick, so this is ten times as large as that, so we are talking about significant quantities. The important thing is to know the oil is in the rock and that’s what we now know.”

Three drillings have so far taken place in the southern Golan Heights which have found large reserves of oil. Potential production is dramatic – billions of barrels, which will easily provide all Israel’s oil needs. Israel consumes 270,000 barrels of oil per day.

Although the existence of the oil in the ground is a fact, the critical phase now is to check how easily it can be extracted and whether it involves high production costs. In a period of very low oil prices, extraction will have to be relatively cheap to make exploitation of the field profitable.

Just as Israel’s offshore Mediterranean gas discoveries have created an entire energy industry, so the Golan oil find could also generate a new industry around it. But while the gas has been found dozens of kilometers from Israel, the Golan find is much closer.

The drilling on the Golan Heights has aroused fierce opposition from environmental groups and local residents who fear irreversible damage to the region’s natural landscapes, flora and fauna. This is likely to make any potential extraction from the ground and production a more protracted process lasting very many years.

Above and beyond the bureaucratic and environmental problems of pushing ahead with oil production, there are also the geopolitical considerations. The international community considers the Golan Heights, which was captured from Syria in 1967, as occupied territory and does not recognize Israeli sovereignty over the region.

Bartov said, “There is enormous excitement. It’s a fantastic feeling. We came here thinking maybe yes or maybe no and now things are really happening.”