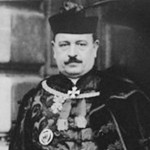 Hungary’s Jewish community protested against plans to erect a statue to a politician who played a role in drafting anti-Jewish laws during World War Two, saying that it would bring back the “dark and menacing shadow of anti-Semitism.”

A private foundation wants to put up a statue in honor of Balint Homan, who served as Hungary’s minister of religion and education twice between 1932 and 1942.

“Balint Homan was a decisive figure of the far-right politics that eventually contributed to the deportation of 600,000 Hungarian Jews,” the Federation of Hungarian Jewish Communities said.

Its chairman, Andras Heisler, said, “As Hungarian citizens, we protest against the erection of the statue of an anti-Semitic politician in democratic Hungary.”