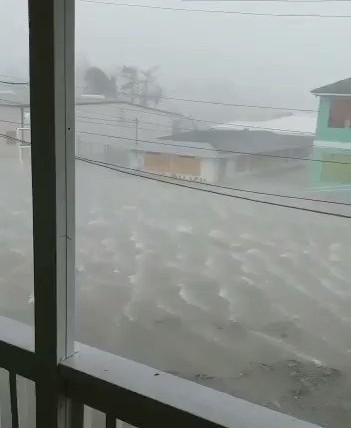 With peak winds of 185 mph Sunday, Hurricane Dorian became the strongest storm on record to strike the Bahamas and among the top few most intense ever observed in the Atlantic Ocean. The Category 5 storm next threatens to bring hurricane force winds, coastal flooding and heavy rain to the east coast of Florida and Southeastern U.S.

At present, the storm is generating “catastrophic conditions” in the northern Bahamas with wind gusts up to 225 mph, a storm surge of 18 to 23 feet, which is the storm-driven rise in ocean water above normally dry land, and up to 30 inches of rain.

As the storm closes in on Florida’s east coast, the National Hurricane Center has posted hurricane and storm surge warnings for some areas. The hurricane warning stretches from Jupiter Inlet (just north of West Palm Beach) to the Volusia/Brevard county line (just north of Titusville). The storm surge warning spans from near West Palm Beach to Titusville. In some areas the surge could reach four to seven feet, the Hurricane Center projects.

These warnings are focused on the period from Monday night through early Wednesday. Tropical-storm-force winds could begin in South Florida as soon as Monday afternoon.

Although the center of Dorian, containing its extreme Category 5 winds, may remain offshore Florida, its forecast track is so close to the coast necessitated warnings. “A small deviation to the left of the track could bring the intense core of the hurricane its dangerous winds closer to or onto the Florida coast,” the Hurricane Center wrote in its 5 p.m. discussion Sunday.

Beyond Florida, Dorian will take aim at coastal Georgia and the Carolinas from Wednesday through Friday. “There is an increasing likelihood of strong winds and dangerous storm surge along the coasts of Georgia, South Carolina, North Carolina later this week,” the Hurricane Center wrote. “Residents in these areas should continue to monitor the progress of Dorian and listen to advice given by local emergency officials.”

While Florida and areas farther north await effects from the monster storm, a “catastrophic” scenario is unfolding in the northwestern Bahamas, where the storm’s eyewall, the ring of destructive winds around the center, struck Sunday. On Great Abaco, the Hurricane Center warned of a “life-threatening situation” into Sunday evening.

On Sunday night, as the storm’s eyewall pushed west “with all its fury toward Grand Bahama,” according to the Hurricane Center, the storm was predicted to unleash wind gusts over 220 mph, along with storm surge flooding of 18 to 23 feet above normal tide levels. “These hazards will cause extreme destruction in the affected areas and will continue for several hours,” the Hurricane Center stated.

The storm’s core of devastating wind and torrential rain, totaling up to 30 inches, may sit for at least 24 hours over the northern Bahamas as steering currents in the atmosphere collapse, causing Dorian to meander slowly, if not stall outright, for a time.

The storm – depending on its exact track over the northern Bahamas, particularly Grand Bahama and the Abaco Islands – could reshape these locations for decades.

As of 10 p.m., the storm was 60 miles east of Freeport on Grand Bahama Island and was crawling west at five miles per hour. The storm’s peak winds are 185 mph, and Dorian has maintained Category 4 and now Category 5 intensity for an unusually long period.

Storms this powerful typically tend to undergo cycles that weaken their high-end winds for a time, but Dorian has avoided this dynamic.

After models run early Saturday projected the storm track to go offshore Florida, some that were run late Saturday into Sunday forecast it closer to the Florida coast.

Dorian has grown, which may have implications for the Florida forecast. Hurricane-force winds now extend outward, up to 45 miles from the center and tropical-storm-force winds extend outward up to 140 miles (220 km). The latest forecast from the Hurricane Center calls for Dorian to remain a Category 5 storm for 24 hours before slowly weakening, but remaining a formidable hurricane, as it moves close to Florida and northward to the Carolinas.

Because the storm is predicted to be a slow mover, effects from wind, rain and storm surge could be prolonged, lingering through the middle of next week on Florida’s east coast.

Irrespective of the storm’s ultimate course near Florida’s east coast to the North Carolina Outer Banks – or even inland – significant coastal flooding is likely because of the force of Dorian’s winds and astronomically high or king tides.

The risk of a direct strike on Florida is less than it was a few days ago but has not been eliminated. Much depends on the strength of the high-pressure area that has been pushing Dorian west, toward the northern Bahamas and Florida.

Most models show steering currents collapsing as Dorian nears Florida, before it gets scooped up by a dip in the jet stream approaching the East Coast and starts turning north.

However, this collapse in steering currents is so close to Florida that some models continue to track the storm close enough for damage in parts of the state.

However, a few models do bring it inland or come perilously close. And there is time for the models to shift further – either closer to Florida and the Carolinas or farther out to sea.

In a statement, the National Weather Service forecast office in Melbourne, Florida, said “The situation has become more serious, especially for the east central Florida coastal counties,” based on recent forecast guidance.

The latest storm surge forecast for Florida shows that if the peak surge occurs at the time of high tide, the area from the Volusia and Brevard County Line to Jupiter Inlet could see four to seven feet of water above ground, while the region from Deerfield Beach to Jupiter Inlet experiences two to four feet.

Farther north into coastal Georgia and the Carolinas, the forecast is also a nail-biter. Just small differences in where the storm starts to turn north and, eventually, northeast and the shape of the turn will determine where and whether Dorian makes landfall.

Scenarios involving a direct hit, a graze and a near miss appear equally likely based on available forecasts. As the Hurricane Center writes: “Residents in these areas should continue to monitor the progress of Dorian.”

The shape of the coastline from northern Florida through the Carolinas means there is a risk of significant storm-surge flooding there even if the storm’s center remains just offshore.

However, unlike with notorious recent storms such as Matthew and Florence, it’s unlikely that the Carolinas will experience devastating rainfall amounts from Hurricane Dorian, as the storm will pick up forward speed on nearing the Carolinas.

Dorian is tied for the second-strongest storm (as judged by its maximum sustained winds) ever recorded in the Atlantic Ocean, behind Hurricane Allen of 1980, and, after striking the northern Bahamas, tied with the 1935 Labor Day hurricane for the title of the strongest Atlantic hurricane at landfall.

The storm’s peak sustained winds rank as the strongest so far north in the Atlantic Ocean east of Florida on record. Its pressure, which bottomed out at 910 millibars, is significantly lower than Hurricane Andrew’s when it made landfall in South Florida in 1992 (the lower the pressure, the stronger the storm).

With Dorian attaining Category 5 strength, this is the first time since the start of the satellite era (in the 1960s) that Category 5 storms have developed in the tropical Atlantic in four consecutive years, according to tropical weather expert Brian McNoldy.