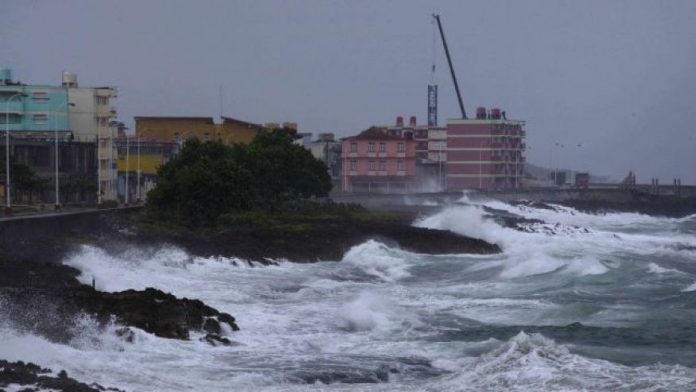 Even if Matthew avoids making landfall and Florida dodges some of the worst-case scenarios laid out by forecasters and public officials in recent days, it still poses a considerable threat to residents from Florida to North Carolina. The strongest hurricane to menace the United States in a decade is continuing its trek north as it rumbles near the coastline, and forecasts warn that a dangerous storm surge could cause life-threatening flooding in as many as four states.

Early Friday, the storm weakened to a Category 3 storm, but still packed dangerous winds of 120 mph that could threaten land if the storm drifts only slightly closer to shore. The National Hurricane Center reported that the hurricane’s center was “hugging the coast of Central Florida” – moving north-northwest at 12 mph – as it took aim at the northern part of the state and then onto Georgia and South Carolina.

“The storm has only passed half our state, so this is not over,” Florida Gov. Rick Scott, R, said during a briefing Friday.

About 600,000 people were without power Friday morning, Scott said, warning that this number would likely rise.

Scott said that officials remained very concerned about storm surge. He also said he was particularly worried about Jacksonville, the most populous city in the South, which is right along the coast in the northeastern corner of Florida.

“The worst effects are still likely to come,” he said.

Millions have been ordered to evacuate homes along the Southeast, and all along the coast many more stocked up on supplies and hunkered down as the storm approached. Matthew roared across the Caribbean before approaching the United States, and officials blamed it for at least 300 deaths in Haiti, where some reports estimated a far greater toll.

President Barack Obama on Friday said that much like during Sandy in 2012, the storm surge could cause significant damage.

“I emphasize this is still a really dangerous hurricane,” Obama said during remarks in the Oval Office after he met with the heads of the Federal Emergency Management Agency and Department of Homeland Security.

Obama again urged residents to listen to what local officials are saying, expressing concerns about areas in northern Florida and Georgia.

“Do not be a holdout here,” he said. “We can always replace property. We cannot replace lives.”

Scott said he had not heard of any reported deaths due to the storm by Friday morning. Local reports said there was one storm-related death early Friday, a woman who authorities said died from a heart attack in St. Lucie County overnight. While her death did not appear directly due to the storm, officials said they considered it storm-related because first responders were unable to get to the woman due to the hurricane.

Across the Southeastern United States, officials pleaded all week with residents to take seriously the threat of a storm that would’ve been the strongest hurricane to hit the country since Wilma in 2005.

More than 2.5 million people were told to evacuate in Florida, Georgia and South Carolina, where schools and government offices alike were shuttered this week. Disney World closed down Friday, and college football games from Gainesville, Fla., to Columbia, S.C., were called off or rescheduled.

There was even extreme caution from the operators of Waffle House, which has famously become a shorthand for emergency responders looking to gauge the impact disasters have on communities because of how quickly it reopens restaurants. The chain said Friday it had more than two dozen locations closed from Florida to South Carolina.

The National Hurricane Center said there could be a storm surge up to 11 feet along the central and northern Florida coastline, with up to 12 inches of rain possible and winds likely to reach 100 mph in many areas – and, if the eye of the storm comes ashore, sustained winds could climb to 120 to 130 mph with even higher gusts.

Forecasts have used dire language when describing the storm’s potential impact. The National Weather Service warned that brutal winds could leave some places “uninhabitable for weeks or months.” The National Hurricane Center called it “extremely dangerous” and spoke grimly of flooding dangers.

South Carolina Gov. Nikki Haley, R, said that more than 300,000 people had already evacuated in the state, and she said more evacuations were going to follow.

On Friday, the National Weather Service reported a series of blistering winds across Florida’s coastline. .A wind gust of 68 mph was reported in Daytona Beach. Gusts topping 100 mph were recorded in northern Brevard County, east of Orlando, according to the weather service, and hurricane-force winds raged through the morning. Flood warnings were also issued across parts of Volusia, Brevard and Seminole counties.

Volusia County Manager Jim Dinneen said during a news conference that he was “hoping and praying that the storm stays to the east,” saying that movement of as little as five or 10 miles in the storm’s path could make the difference between “wind damage and catastrophic damage.”

As the storm neared Daytona Beach, trees were whipped around Friday morning. Downed trees and power lines dotted the roads, where only police cars could be seen driving around. Just to the south in Ormond Beach, a neighbor’s tree landed on the roof of Lynn Kearns’s home, but she still has no plans to leave.

“Our street doesn’t usually flood,” said Kearns, who had lived in this part of Florida for nearly 30 years. The pine tree dangled off the roof as Kearns spoke.

Her windows are boarded up and she was watching the wind whip trees along the street, part of which was already flooded, but said leaving would be too difficult for her mother and two dogs.

At a Hampton Inn in Ormond Beach, guests ate breakfast Friday by flashlight and LED candlelight after the electricity went out earlier that morning.

After a night of howling winds and whistling gusts, the power went out at 7:30 a.m., and through the morning large raindrops popped against as windows and sheets of rain swept in all directions.

Cochise Israel lives a half-block from the beach and would ordinarily have stayed there. He said he prefers to be in the home when the roof tears off so he can move furniture into dry areas and favors “fighting it off as opposed to going back to complete destruction.”

“I’ve always rode them out,” said Israel, 38. “If anyone is in trouble, I have chainsaws and help hem get out. I’ve always been the hero.”

He spent much of the week helping board up homes and fill sandbags for his older neighbors who opted to ride out the storm. But he said he had little choice but to leave this time, because he had to take care of his 97-year-old great aunt, Dorothy Butler, who suffers from dementia.

“It’s kind of hard to be so far away,” Israel said.

As guests gathered around the hotel doors to watch the squalls, the temperature in the rooms continued to rise. One of the guests, Pat Sheil, had called Tuesday to reserve a spot at the Hampton Inn for her and her cat, because her manufactured home was squarely in the path of Matthew’s winds.