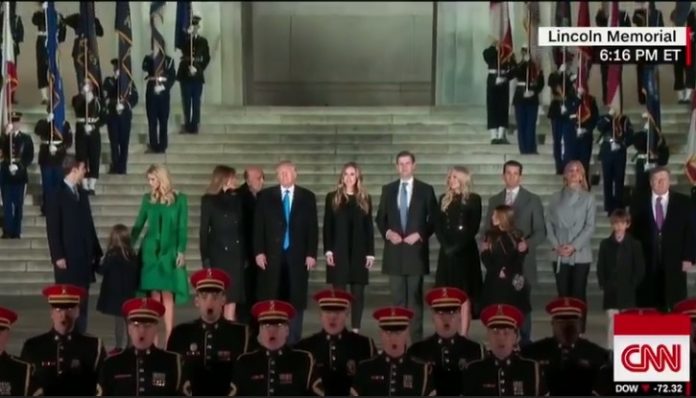 On the eve of his inauguration, President-elect Donald Trump boasted to campaign donors about his election victory and the hard work behind it and touted an incoming Cabinet “the likes of which has never been appointed.”

An upbeat Trump delivered meandering remarks Thursday night at a black-tie “candlelight dinner” for donors at Union Station that capped off a day of inaugural activities in advance of his swearing in as the nation’s 45th president on Friday.

Trump began by reminiscing about “this beautiful map” that emerged on election night, one that showed him with more electoral votes than Democratic nominee Hillary Clinton, despite his loss in the popular vote.

“There were a lot of red states that weren’t supposed to be red,” Trump told the crowd. “That was some big victory. .. Records were set that haven’t been beaten since Ronald Reagan.”

He also cited another factor in his victory: “I think I outworked anybody who ever ran for office.”

Trump predicted Republicans would pick up seats in Congress in two years and said that when he seeks reelection in 2020, “we’re going to win the old-fashioned way: We’re going to win because we did so well” in office.

With several of his Cabinet nominees facing rough confirmation proceedings in the Senate, Trump declared that “the other side is going absolutely crazy.”

Because of ethical issues and other concerns, Senate Democrats are attempting to slow down the confirmation of several of Trump’s nominees, a dynamic that Sean Spicer, the incoming White House press secretary, complained about earlier Thursday.

“There’s not a pick that I don’t love, and if there was, I’d tell you right now,” Trump said of his 21 Cabinet nominees.

He singled out his final nominee — former Georgia governor Sonny Perdue for agriculture secretary — saying he had been sold on his qualifications weeks ago.

But Trump said he continued to interview people, including some who were “politically correct” — an apparent reference to pressure Trump received to add a Latino or another woman to his Cabinet.

He said he remained sold on Perdue in part because he is a farmer, which other nominees were not.

Trump also offered shout-outs during the dinner to several people who had helped him during the campaign, including his daughter, Ivanka, who was in attendance.

Trump said his daughter had “married very well,” a reference to her husband, Jared Kushner, whom Trump has hired as a senior adviser in the White House. Kushner’s portfolio will include the Middle East.

“I sort of stole her husband,” Trump told the crowd. “He is so great. If you can’t produce peace in the Middle East, nobody can.”

Even though Priebus had to remain neutral in a Republican primary in which there was a crowded field, “I always felt like he favored me,” Trump said.

The president-elect also summoned his campaign manager, Kellyanne Conway — or “my Kellyanne,” as he called her — up to the stage.

Trump praised Conway’s ability to appear in hostile television interviews and more than hold her own.

“She gets on and she does destroy them,” Trump said. “Thank you, baby, thank you.”

Before departing, Trump also relayed his earlier inaugural events on Thursday, including a wreath laying at Arlington Cemetery.

“It was so beautiful,” Trump said of the event, adding that there were “so many people.”

He also said the crowd at a “welcome concert” at the Lincoln Memorial had vastly exceeded his expectations and that he was not getting enough credit for the remarks he delivered there.

“The big one is tomorrow at around 12,” Trump said, referring to his inaugural speech.

He cited one advantage to a potential downpour: “People will realize it’s my real hair.”