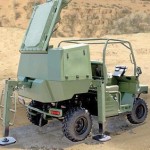 The IDF has successfully introduced a tactical radar system into the Gaza conflict.

In the middle of the fighting in the Gaza Strip, in an attempt to deal with the mortar shells threat to the large forces in the field near Gaza and those already operating in Gaza, the IDF has bought forward the launching of the WindGuard radar system into operational use. The system, based on tactical radar, defends ground forces exposed to the threat of short-range rockets and shells. The system was developed by Israel Aerospace Industries Ltd. (IAI) (TASE: ARSP.B1) subsidiary Elta Systems, which also produces the radar used by Iron Dome. The system was first unveiled a month ago at the Eurosatory international weapons system exhibition in Paris. This rapidly deployable mobile system immediately identifies the launching of short-range rockets or shells in the direction of a defined area, and provides the forces with warning of the launch.

The IDF, which has showed great interest in the system, has been involved in its development process, and planned to procure it. Operation Protective Edge in Gaza and the heavy mortar fire against the forces in the area, however, expedited its introduction into operational use. In recent days, Elta has delivered a number of such systems for use by the forces operating in the combat theater. It is not clear whether one of the systems was deployed yesterday afternoon near Kibbutz Beeri, where a mortar shell killed four IDF soldiers and wounded six others. Read more at GLOBES.