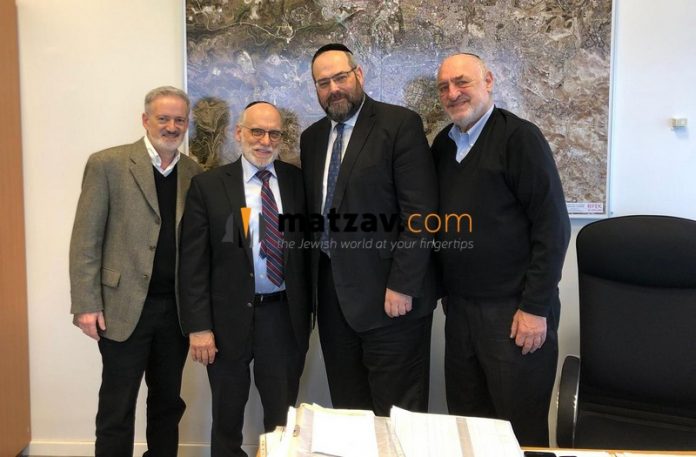 A leadership mission of the International Committee for Har Hazeisim and senior police officials agreed on a number of major steps to further upgrade the  vastly improved security situation on Har Hazeisim at meetings on February 18-21. Avrohom Lubinsky, the Chairman of the ICHH, called his 4-day urgent mission “a major breakthrough in the ongoing cooperation between security officials and the ICHH to further enhance the security of mourners and visitors on Har Hazeisim.” Mr. Lubinsky was joined by Harvey Schwartz and Jeff Daube, the co-chairmen of the Israel chapter of the ICHH.

Amongst the new steps that will be implemented will be a direct line between the police and the ICHH leadership, increased patrols by the Border Police, new gating to control access to the cemetery, and greater enforcement by police of any violations. In a meeting with Chief Inspector Doron Turgeman, who is the Commander of the Marchev Kedem police headquarters, which is responsible for the security of Har Hazeisim, the ICHH asked for zero tolerance on any incidents, which the Commander said was sharply down from even a few months ago.

The ICHH leadership was joined by Rabbi Yoav ben Zur (Shas), the head of the historic 70-member Knesset Caucus on Har Hazeisim and senior police commanders in a comprehensive security review of the historic 3000-year old cemetery. Security was also the topic of interest for a leadership mission of the Conference of Presidents of Major American Jewish Organizations, headed by its Executive Vice President, Malcolm Hoenlein, at a luncheon at the Seven Arches Hotel, which was joined by Rabbi Hillel Horowitz, head of the Council of Cemeteries in Jerusalem.

In addition to the pressing security issues, the ICHH group also conducted high level meetings with senior officials at City Hall, including Mayor Moshe Lion, Deputy Mayors Eliezer Rochberger, Fleur Hassan-Nahoum, and Yossie Deutschand the new members of the City Council about the ongoing plans to build a Visitor Education Center, a joint project of the municipal and national governments and the ICHH. “The construction of the Visitor Center is the long-term insurance policy on the safety and security of Har Hazeisim,” said Mr. Lubinsky. He revealed that the magnificent Center will include a fully-equipped permanent police station. The ICHH briefed Yitzchak (Buzzie) Herzog, chairman of the Jewish Agency, on the latest developments on Har Hazeisim.

The ICHH also held inspirational meetings with Rabbi Shlomo Amar, the Sephardic Chief Rabbi of Yerushalayim and the noted Torah authority, Rabbi Usher Weiss. The Torah leaders urged the ICHH “never to let their guard down to protect the 150,000 holy neshamos that are buried there.”

Founded in 2010, the ICHH with branches in New York, Jerusalem, Los Angeles, Toronto, London and Amsterdam, has taken the lead in restoring security to Har Hazeisim with a network of surveillance cameras, new lighting, a permanent police station, new gating, and major improvements to the infra-structure of the holy cemetery. The restored security has encouraged more than 2000 people to visit daily, as compared to less than 200 in 2016. In addition, tens of thousands have visited the kevarim of many of the saintly figures buried on Har Hazeisim such as the Admorim of Gur, the Or Hachaim, the Barteneura, Rebbes of Zhvil and more.