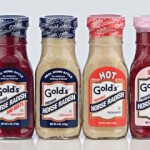 Hempstead LI – Gold’s Pure Foods, known for its horseradish and other products, has been sold to LaSalle Capital, which also owns Westminster Cracker of Rutland VT for an undisclosed amount. Robert Abramowitz will serve as the CEO of the merged company.

Founded in 1932 by Tillie and Hyman Gold, their horseradish was originally produced by hand including cleaning, cutting and grating the horseradish roots; measuring and mixing the ingredients; filling the jars; and pasting on the labels (with paste made at home with flour and water).

The business was subsequently managed by their three sons who automated the process and grew the business in their Brooklyn plant before moving the business to Hempstead. Their sons, Marc and Steve (third generation Golds) managed the business until today and will stay on for an unspecified time.

Under the second and third generation Golds, horseradish expanded into the mainstream from its niche Jewish market used primarily as a condiment to gefilte fish, especially on Jewish holidays.

One of the busiest time for Gold’s is Pesach, when it sells a significant portion of its annual sales of horseradish and other products like Borscht. The business further grew when Gold’s acquired Baker’s Mustard, integrating the businesses in Gold’s 88,000 square foot facility in Hempstead.

Gold’s has always been recognized as one of the leading kosher brands. Its jingle on radio is well-known to tens of thousands of consumers. Both companies, Gold’s and Westminster, are certified kosher by the Orthodox Union.