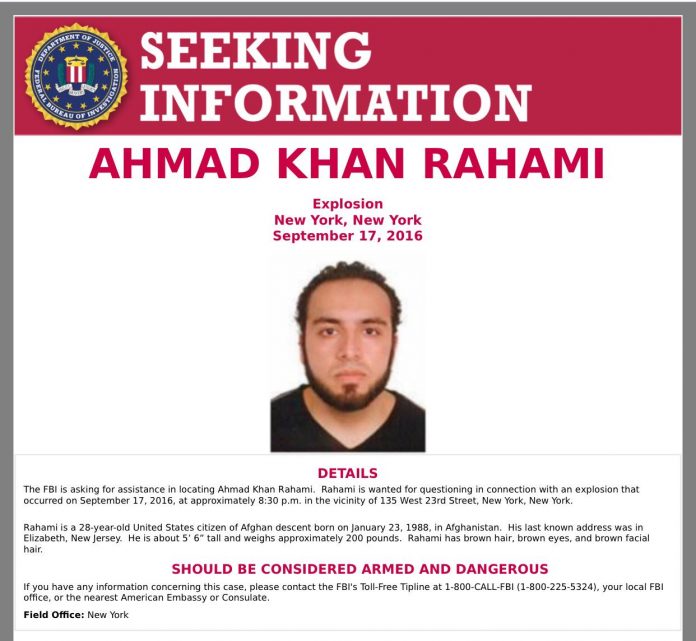 The New York Police Department announced Monday that it is seeking 28-year-old Ahmad Khan Rahami in connection with the Motzoei Shabbos bombing in Manhattan, though the man’s role in the incident remains unclear.

Law enforcement officials said they were investigating whether Rahami could have been influenced by international militant groups or the ongoing conflict in his homeland. Court records show the Rahami family has ties to Afghanistan.

New York Police Department spokesman J. Peter Donald announced the development on Twitter. It came after authorities took “a number of people” into custody in connection with the bombing, and their counterparts in New Jersey worked to render safe “multiple improvised explosive devices” discovered at a train station in Elizabeth just across from Staten Island.

FBI agents also launched what they termed an “operation” at an address on Elmora Street in Elizabeth. Court records show members of the Rahami family live and work at the address.

The developments sowed further concern about terrorism in the region and across the country. Police already had been investigating three weekend incidents – explosions in New York and New Jersey and a stabbing attack in Minnesota – that took place within a 12-hour period on Saturday.

About 8:45 p.m. Sunday, the FBI and the New York Police Department stopped what the bureau’s New York Field office called a “vehicle of interest” in the Manhattan bombing investigation, and took people into custody. As of early Monday, authorities said no one had been charged with a crime, and the investigation was continuing.

An FBI spokeswoman, Kelly Langmesser, gave no further details on those detained. But the Associated Press, citing government and law enforcement officials, reported that five people were questioned.

Law enforcement also combed an area around an Elizabeth, N.J., train station where a backpack with “multiple improvised explosive devices” was found.

In Elizabeth, a port city near Newark International Airport, Mayor J. Christian Bollwage said that up to five devices were discovered inside a backpack, and one of the devices – found around 8:30 p.m. Sunday – exploded as it was being disarmed, shortly after 12:30 a.m. Monday. The New Jersey Transit rail system halted rail service near Newark Airport due to the police activity. Regular service was restored before dawn.

Amtrak announced its Acela Express Northeast Regional and other services would operate with schedule modifications Monday, and passengers should be prepared for delays and cancellations.

“This could take more hours than we thought initially” to disarm the other devices, Bollwage said. Bomb technicians from the FBI, as well as New Jersey law enforcement, were processing the scene. “I’m not sure if the morning commute will be easy,” Bollwage said.

Officials said they could identify no definitive links between the disturbances – the discovery of the devices in Elizabeth, the bombing that injured 29 in Chelsea, an explosion along the route of a scheduled race in Seaside Park, N.J., and a stabbing that wounded nine in a St. Cloud, Minn., mall.

Each incident in its own right raised the possibility of terrorist connections, prompting federal and local law enforcement to pour major resources into determining exactly what happened and why. Officials said they were looking aggressively for links in the New York and New Jersey cases.

A news agency linked to the Islamic State claimed Sunday that the suspect in Minnesota, who was fatally shot by an off-duty police officer, was “a soldier” of the militant group, though there was no confirmation of what connection the man may have had.

A claim of responsibility is no guarantee that the terrorist group directed or even inspired the attack, and authorities said they were still exploring a precise motive. The terrorist group made no similar claims about the New York and New Jersey incidents.

In New York, authorities said there was no evidence that the mysterious Saturday-night explosion was motivated by international terrorism, though they confirmed that the bombing was intentional.

Earlier Sunday, New York’s governor said nearly 1,000 police officers and National Guard troops would be sent to bus stops, train stations and airports, as investigators with the New York Police Department, the FBI, and the Bureau of Alcohol, Tobacco, Firearms and Explosives worked to identify the person or people responsible for the explosion.

One law enforcement official said that while it was looking like the New Jersey and New York blasts “might be connected,” investigators still didn’t have any hard evidence. The official also said that only one of the three pipe bombs in New Jersey detonated.

Those injured in the Saturday-night blast in Chelsea had been released from hospitals by Sunday.

The Manhattan explosion occurred about 8:30 p.m. Saturday in the area of West 23rd Street between Sixth and Seventh avenues, injuring 29 people as it hurled glass and debris into the air, officials said. Surveillance video showed passersby running to get away from the blast, and investigators said they would comb through that and older footage to try to identify those responsible.

Authorities said the explosion was produced by some type of bomb, and they posted on Twitter a photo of what appeared to be a mangled Dumpster or garbage container. Masum Chaudry, who manages a Domino’s Pizza near the scene, said the explosion “shook the whole building” and caused “total chaos.”

Cuomo said, “When you see the amount of damage, we really were very lucky there were no fatalities.”

A short time after the explosion, just a few blocks away, police found another potentially explosive device, which looked like a pressure cooker with wiring, according to a law enforcement official who spoke on the condition of anonymity to discuss the ongoing investigation. Pressure cookers were used in the two bombs detonated at the Boston Marathon in 2013.

The New York police said that this pressure-cooker-type device was first rendered safe at a Bronx facility. This device and materials from Seaside, N.J., were sent to the FBI’s lab in Quantico, Va., where they and the remnants of the device that exploded will be analyzed, authorities said.

Sara Miller, who was at a restaurant two blocks from the site of explosion, said she heard the blast, then saw people scrambling to get away. “I was here on September 11th so I thought, maybe, you know, I was being paranoid . . . but then I saw people running,” said Miller, 42. “It is a scary time because you never know when it will happen again.”

City, police and FBI officials said it was too early to determine any type of motivation, though they insisted they would not shy from labeling the crime an act of terror if it became appropriate to do so.

The incident comes as foreign leaders, including many heads of state, are heading to Manhattan for the United Nations General Assembly. Secretary of State John F. Kerry arrived Saturday, while Obama is scheduled to head to the city on Monday.

This annual meeting – held more than two miles from the site of the explosion in Chelsea – is traditionally a challenging time for New York, as many roads are shut down and the heavy security leads to traffic jams. Officials said they had already prepared to beef up security, and now they would intensify those efforts.

On the campaign trail, the Democratic and Republican presidential candidates offered varied reactions to news of the incident. As early reports circulated Saturday night, Donald Trump declared that a “bomb went off” in New York City and said: “We better get very, very tough. We’ll find out. It’s a terrible thing that’s going on in our world, in our country and we are going to get tough and smart and vigilant. … We’ll see what it is. We’ll see what it is.”

Hillary Clinton condemned what she characterized as the “apparent terrorist attacks” in Minnesota, New Jersey and New York.

“This should steel our resolve to protect our country and defeat ISIS and other terrorist groups,” Clinton said, using an acronym for the Islamic State. She added, “I have laid out a comprehensive plan to do that.”

Moyed Abu, 28, a manager of OMG, a jeans store on 7th Avenue, said he and two employees were in the store at the time of the blast. Abu said they assumed initially it was construction noise – but immediately saw dozens of people, though not everyone, running in both directions, Abu said.

“I saw that some people started to take pictures,” he said. “In this situation, it’s better to just leave! It’s not safe!”

The Chelsea explosion occurred about 11 hours after a pipe bomb exploded in a Jersey Shore garbage can, shortly before a scheduled charity 5K race to benefit Marines and Navy sailors. No one was hurt.

Officials said that device, too, would be sent to the FBI lab in Quantico, though Cuomo noted the pipe bombs used in New Jersey “appear to be different” from those in New York.

New York Police Commissioner James O’Neill said officials would explore a possible connection between the two cases but noted, “At this point, there doesn’t appear to be one.”

Two law enforcement officials said residue of tannerite – used primarily for making exploding targets for firearms practice – was found in material that had detonated in New York. The explosive material found in New Jersey was a black powder.

The two officials said a cellphone was used to detonate the explosives in both New York and Seaside Park, N.J. Bollwage said there was no cell phone with the devices in Elizabeth.

In another incident Saturday night in Minnesota, a man who made reference to Allah and asked at least one person whether he or she were Muslim stabbed and wounded nine people inside a Minnesota mall. He was shot to death by an off-duty police officer. On Sunday, the Islamic State claimed that the attacker was “a soldier of the Islamic State” and “carried out the operation in response to calls to target the citizens of countries belonging to the crusader coalition.”