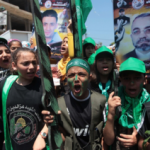 The IDF arrested 17 additional Palestinian suspects overnight on Wednesday, including a senior Hamas operative near Bais Lechem.  Overall the IDF has arrested more than 350 Palestinians in the search for three missing teens, Gilad Shaer, Eyal Yifrah and Naftali Frankel.

Despite the arrests, the IDF has said it will begin scaling down the operation in search of the missing teens as the operation switches to more intelligence gathering.

“A large part of the operation against Hamas has been exhausted,” Israeli Defense Minister Moshe Yaalon said.

“We are making progress all the time,” Yaalon said. “We are not working in the dark. It is only a matter of time till we get to the hostages and the kidnappers, but we need patience.”