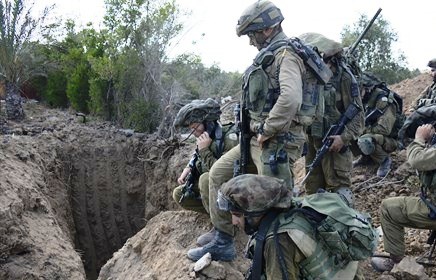 IDF officials said today that it is not clear that Israeli troops will manage to find all tunnels leading under the Gaza-Israel border.

Army spokespeople also told the Hebrew-language Ynet website that attacks from the air and attempts to thwart the smuggling of digging materials have limited affect. The website said that Hamas sees the tunnels as a central element not only in its efforts to conduct a mega-terror attack against Israel, but also to kidnap a soldier, dead or alive, to be used as a bargaining chip.

“There is no Iron Dome to guard against the threat from the tunnels, and no one in the world has any answer to this issue,” said IDF Southern Command officers this week. The Defense Minstry and the IDF have been trying for years to come up with a way to fight this phenomenon, with no luck,” the website reported.

The military made the comments following a firefight between Hamas terrorists and a Givati infantry unit on Wednesday when terrorists emerged from a new tunnel. Upon inspection of the tunnel, IDF troops discovered regulation Israeli army uniforms, detailed maps and advanced weapons designed for close-range combat.