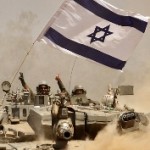 An IDF officer in reserves who fought in Operation Protective Edge in the summer of 2014 was detained upon landing in the UK a few weeks ago due to a complaint made against him that he was involved in war crimes, Ynet reports.

Any soldier who fought in the 50-day war, whose details or photos were posted online, may find himself on the blacklist of pro-Palestinian organizations who filed and are still filing complaints at European police stations.

The officer, who came to Britain on a business trip, was released a few hours after being detained, thanks to the intervention of the Foreign Ministry with the assistance of the IDF’s Operations Directorate and the IDF’s international law division. British authorities apologized to Israel following the incident.

The defense establishment believes that the name of the reserve officer, who served on the home front during the operation, got mixed up in the lists of soldiers and officers which pro-Palestinian organizations drew up. These organizations submitted these names to countries worldwide, especially in Europe, claiming that the soldiers and officers were allegedly involved in war crimes against Palestinians in the Gaza Strip.

“Every soldier and officer who served in Operation Protective Edge whose name and picture were published in the media in the standard manner by the army but also on social networks, is liable to encounter such incidents while abroad,” a source from the IDF’s prosecutor’s office told Ynet.

“This includes 60 recipients of citations for excellence during the operation whose names and photographs were released by the IDF. For the Israeli public, it’s a badge of honor, but for pro-Palestinian organizations it’s the bread and butter of their deligitimization war against Israel,” the source continued.

“It is not just arrest warrants or delays of chiefs of staff or former generals, such as (former IDF chief) Gabi Ashkenazi, or (former head of Military Intelligence) Amos Yadlin, but the persecution of the every last soldier who served in the operation and whose identity was officially released,” the source concluded. Read more at Ynet.