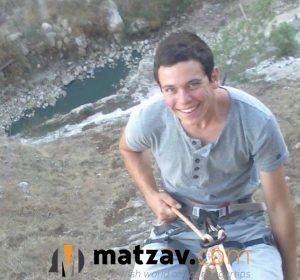 Elhai Teharlev — the 20-year-old IDF sergeant who was killed in a car-ramming attack carried out by a Palestinian terrorist at a bus stop in the West Bank on Thursday morning — was a “sweet kid” who “couldn’t hurt a fly,” a friend told the Hebrew news site nrg.

Teharlev — a Talmon resident who served in the Golani Brigade — was laid to rest on Thursday evening at the Mount Herzl military cemetery in Jerusalem. He is survived by his parents, Ohad and Avital, and six siblings — three brothers and three sisters.

The slain soldier was a graduate of the Makor Chaim yeshiva in Gush Etzion — the same institution where two of the three Israeli teenagers kidnapped and murdered by Hamas terrorists in June 2014 studied.

Talmon — a settlement located between Modi’in and Ramallah — published a statement following the attack, saying, “The dear and beloved Elhai, son of the community, was murdered. A talented, modest and popular boy. The pain pierces the hearts of the neighbors, friends, youth movement members and all community members who knew Elhai and admired him.”

Nachum Bienenfeld — a volunteer United Hatzalah EMT who responded to the attack, which took place next to Ofra — said, “When I arrived at the scene, I found a a very tragic and difficult situation. The Palestinian vehicle had come up on the sidewalk and rammed into a group of soldiers who were standing near the bus stop. The vehicle had continued and landed in a ditch by the side of the road…Security poles that had been set up near the bus stop due to a previous ramming attack that had taken place at that bus stop prevented injury to other civilians who were standing at the bus stop.”

President Reuven Rivlin tweeted, “We lost today a dear son, Elhai Teharlev, in our ongoing struggle to safeguard our citizens. Our thoughts are with the bereaved & injured.”

Prime Minister Benjamin Netanyahu tweeted, “In the name of the people of Israel, I ask to condolences to the Teharlev family over the murder of Elhai — their dear son, a Golani Brigade soldier — in a ramming attack today. May his memory be a blessing.”

The perpetrator of Thursday’s attack next to Ofra was arrested on site. He was identified as 22-year-old Malik Hamad, a resident of the nearby Palestinian village of Silwad. Following the attack, the IDF froze the permits of Hamad’s family members that enabled them to work in Israel.

The Gaza Strip-based Hamas terrorist group praised Hamad’s action, with a spokesperson characterizing the attack as a “heroic” response to “the continued crimes of the Zionist occupation.”