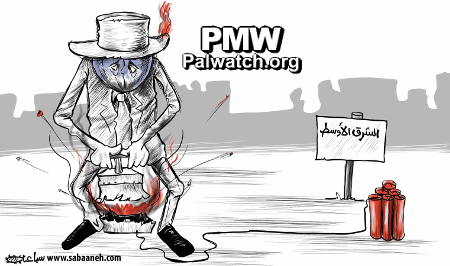 A cartoon appearing in the Palestinian Authority press on Wednesday provided a pictorial expression of the PA’s take on the Brussels bombings, which left at least 34 people dead and hundreds wounded earlier this week, an Israel-based watchdog reported on Thursday.

According to a Palestinian Media Watch report, the cartoon, published in the official PA daily Al-Hayat Al-Jadida, shows a Westerner holding a cauldron of blood/detonator attached to sticks of dynamite near a sign reading “the Middle East,” with the caption: “Those who prepare the poison will taste it themselves, and today Europe is having a taste of what it prepared with its own hands.”

The sentiment that the West brought global terrorism on itself was expressed more fully in the immediate aftermath of the Brussels suicide bombings by the spokesman of the PA Security Forces.

Adnan Al-Damiri posted on his Facebook page on Tuesday: “While we condemn and denounce terrorist acts everywhere in the world, we Arabs are the ones who have been most severely burned by the fire of terror, which has been created and exported by the US and Europe since the Arab Jihad fighters in Afghanistan, and before that by exporting the Jewish terror to Palestine, supporting it and justifying it. Today, Europe is being burnt by its [the terror’s] fire in its airports and squares. I do not gloat but feel pain over every innocent soul that was killed, but those who prepare the poison will taste it themselves, and today Europe is having a taste of what it prepared with its own hands. Unless you fight terror everywhere, first and foremost in Palestine, since the [Israeli] occupation is the ugliest form of terror, as well as in Syria, Iraq, Yemen, Libya, Egypt, Tunisia and Jordan — you will be burnt by its fire, and terror has no religion.”

Al-Damiri’s reference to “Jewish terror in Palestine” comes in the midst of what some have been calling a lone-wolf intifada — a thus-far six-month terror spree perpetrated by knife-wielding, car-ramming and rifle-armed Palestinians against Israelis. Israel holds the PA responsible for encouraging this violence through incitement in mosques, schools and the media – and has appealed to social media platforms, such as Facebook, Twitter and YouTube, to forbid the posting of anti-Israel, antisemitic and violent material.

Earlier this month, it was the YouTube channel of Palestinian Media Watch that got removed. But, following two days of complaints from followers, the page was reinstated.