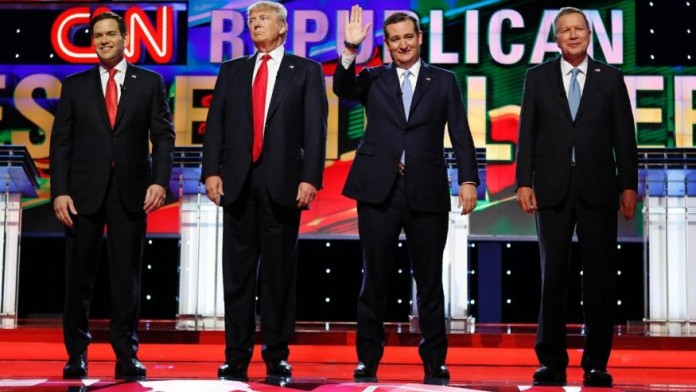 For months, Bette Grande has tapped into her network of fellow conservative activists, pushing them to join her in supporting Ted Cruz for president. She has also laid the groundwork for a campaign of her own – to win a coveted spot as a delegate representing Cruz at this summer’s national party convention.

Grande’s work is coming to a head this weekend at a Ramada hotel and sports center, plastered with campaign merchandise, as North Dakota Republicans meet to choose the 25 delegates they will send to Cleveland in July. The priority for Grande, whether or not she wins a delegate ticket, is to make sure that those who do are committed backers of the senator from Texas.

“Until the slate of delegates is set, we’re calling or emailing everyone,” said Grande, who has juggled her work for Cruz with her duties picking up her grandson at day care.

In any ordinary year, this would be an obscure and suspense-free process, in which local party regulars are rewarded with tickets to the convention in order to focus on partying and casting a pro-forma vote for the presumptive GOP nominee.

But this is no ordinary year. The growing likelihood that front-runner Donald Trump will not secure the 1,237 delegates needed to win the nomination has forced the candidates to prepare for a once-unimaginable prospect: The nomination could be settled at a contested convention.

A series of stumbles by Trump in recent days and the prospect of a Cruz win in Wisconsin on Tuesday have increased the chances that the New York billionaire will fail to gain a delegate majority on the first convention ballot.

Most delegates who arrive in Cleveland will be pledged to certain candidates for the first round of voting, based primarily on the results of primaries and caucuses. But on a second ballot, many of the convention’s 2,472 delegates would be freed up to cast another vote.

Here in Fargo, and in state party meetings playing out across the country in the coming days and weeks, representatives of the three remaining GOP candidates are meeting face-to-face with potential delegates, looking for every possible advantage.

At varying speeds, each campaign is mastering the intricate and often tedious rules that govern each state’s delegation.

Based on the primary and caucus voting through Saturday, Trump has won 736 delegates, Cruz 463 and Ohio Gov. John Kasich 143. And 112 delegates, including the 25 elected in North Dakota, will enter the convention technically “unbound,” though the campaigns are vying to elect their supporters to fill those slots.

“We see the primary election as the regular season and the state convention process as the playoffs, when it comes to this election,” said Wendy Day, Cruz’s state director in Michigan, where the party will meet this week to select delegates on a per-congressional-district and statewide basis. “And of course the Super Bowl, or the big game, is the national convention.”

Day, for instance, has remained in close touch with Barbara Bookout, a retired publisher from Grand Rapids who spent months trying to help Cruz try to win the Michigan primary and is running to be the Cruz delegate from her local congressional district.

Bookout, who is backed by the Cruz campaign, has not drawn an opponent to represent Cruz from her area. But Bookout is not taking any chances.

She is already preparing a speech and literature to distribute at the April 8 district meeting where delegates will be selected. Her goal: to show fellow activists how hard she campaigned for Cruz as his third district chair. She said she made 1,300 campaign buttons and raised money for nine digital billboards.

Underscoring the attention the Cruz campaign is paying to the process, Bookout said that she and Day had lunch a few days ago and regularly talk on the phone. And if something unexpected were to come up in the delegate selection process, Bookout is confident she could turn to Day for advice.

“If I didn’t know the drill, she would be there,” Bookout said.

Across Michigan, the Cruz campaign is planning to publicize its preferred delegate choices to party activists who will be voting this week, possibly using robocalls or sending emails and distributing fliers, according to state Sen. Patrick Colbeck, who with Day is part of the team spearheading the campaign’s Michigan efforts.

Nationally, Cruz’s team has placed a special focus on states where Trump won primaries, examining rules and identifying potential Trump delegates who might be willing to switch loyalties on a second ballot.

The undertaking has presented Trump with a crucial test: translating his broad outsider appeal at the ballot box to the ultimate insider competition.

Trump threatened to file a formal complaint with the Republican National Committee after Cruz appeared to win more delegates in Louisiana despite Trump’s victory there in the March 5 primary. Trump’s team also moved quickly after South Carolina Republican Party Chairman Matt Moore told Time magazine that Trump risked losing the delegates he’d swept in the February primary if he kept suggesting that he would not honor a pledge to endorse the eventual nominee. After being contacted by the Trump campaign, Moore tweeted that “no one is seeking to unbind ANY of South Carolina’s national delegates.”

Still, Trump questioned the fairness of the delegate selection process during a meeting Thursday with party officials in Washington, according to two people familiar with the discussion. In the exchange, first reported by the New York Times, Trump asked RNC Chairman Reince Priebus if he had the right people working on recruiting delegates. One RNC official assured Trump that Ed Brookover, whom Trump recently hired to navigate the delegate selection process, is one of the “best in the business,” according to Corey Lewandowski, Trump’s campaign manager.

Trump announced last week that he was taking new steps to shore up his efforts. Paul Manafort, an experienced strategist who worked for Gerald Ford, Ronald Reagan and George H.W. Bush, will be Trump’s convention manager. Trump is also opening up a Washington office where convention and delegate strategy will be coordinated.

“All we want is fairness and a Trump supporter in every Trump delegate slot. And where there are places to compete for unbound delegates, we’ll be happy to compete fairly for those,” said Brookover.

In Virginia, where Trump won the primary handily and Cruz came a poor third, the Texan’s team is trying to ensure the state’s delegate slate would give the senator from Texas a majority on a second ballot. As of Thursday, the Cruz campaign was fielding a full slate of delegate hopefuls in Virginia, including three from each of the state’s 11 congressional districts and 13 at-large delegates.

At the Cleveland convention, the Cruz camp’s challenge could come in the form of delegates such as Rod Hedlund, who owns a company that repairs industrial equipment and is running to be a Trump delegate.

“The only way Trump will not be the nominee is if it comes from the grass roots,” said Hedlund, who lives in suburban Richmond. “If the RNC comes down with power brokers trying to negate his nomination, there will be a rebellion.”

Asked whether he would abandon Trump if the vote goes to multiple ballots, Hedlund sounded reluctant, though he did not rule it out: “I’ll listen to anybody’s offer, but I can’t imagine anyone being able to offer me anything that would cause me not to pick Trump.”

At the moment, the campaigns are showering attention on North Dakota.

Cruz spoke Saturday afternoon at the Fargo gathering, the only candidate do so. Rafael Cruz, the candidate’s father, has been making speaking trips to North Dakota since last autumn. The week before the state meeting, he made four remote stops, drawing crowds of 75 to 100 at events co-organized by the antiabortion North Dakota Family Alliance and Grande, the Cruz backer hoping to become a delegate.

Months ago, nearly 2,000 North Dakota Republicans applied to be voting delegates to this weekend’s state convention, which will also nominate candidates for governor. Just 105 people, like Grande, applied to be national delegates.

The slate will be finalized Sunday. While the 25 national delegates will not officially be pledged to any particular candidate, the campaigns nevertheless understand that securing spots for their supporters in the slate will effectively translate into votes at the national convention.

On Friday night, the charm offensive came to the Crystal Ballrooms of the Ramada Plaza Fargo. Three rooms named for classical composers were transformed into hospitality suites full of popcorn and sandwiches and bordered by cash bars. The Kasich, Trump, and Cruz delegate-hunters roamed around their tables, answering whatever a would-be delegate had to ask. Brian Jack, Trump’s national delegate director, fielded questions from a notebook-wielding voter – “How many children does Mr. Trump have? What’s his Social Security plan?” – as egg rolls and Trump stickers vanished from the table.

An hour into the event, the crowds started to bulge around Cruz’s table. Carly Fiorina, the onetime candidate who endorsed Cruz, had moved up her flight and arrived early, perfectly timed to meet state and national delegates. Grande snapped photos for the hundreds of people who wanted to meet her, introducing the ones she had personally invited to Fargo, and identifying the people who could join her on the delegate slate.

Cruz had won the night, but only the night. The next day, Ben Carson and his wife, Candy, would arrive and shake many of the same hands, on behalf of Donald Trump.