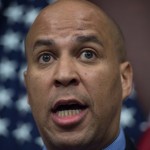 The Observer reports: The Observer has learned that Senator Cory Booker, who is under fire from Jewish supporters who had long treated him as one of their own, has convened an unusual emergency meeting to shore up his support in the wake of his decision to support President Obama’s deal with Iran.

Around noon on Friday afternoon, Mr. Booker’s Deputy Chief of Staff, George Helmy, started emailing leaders of the Jewish community to invite them to a hastily assembled “small roundtable discussion on the JCPOA in his office.” The meeting, which will take place at the Gateway Center on Tuesday at noon, will be joined by Treasury undersecretary Adam Szubin, who will help explain how, “After weeks weeks [sic] of study and consultation, Senator Booker made the decision he feels [sic] in the best interest of Israel, the United States, and our allies.”

Reflecting the seriousness of this issue – and the threat that it poses to his standing in the Jewish community—Mr. Booker is pulling out all stops to kosher his vote. He posted a lengthy essay explaining his decision, so meeting with Jewish leaders has to be perceived as an extension of that. Mr. Szubin has frequently been trotted out by the Obama Administration to placate the Jewish community, which is concerned that the terms of the deal permit Iran to develop a robust nuclear weapons program.

The invitation appeals to its recipients’ vanity, assuring them it is only being “sent to his dearest friends and those whom he relies on for counsel.” For those still not feeling the love, another Booker staffer, Matt Klapper, larded it on hours later, sending a follow-up note asking to “discuss the JCPOA, as well as steps that need to be taken to keep Iran in the corner given the new challenges we’ll soon face.”

Apparently, there’s a second minyan being convened by Mr. Booker, as well – in Livingston, the heart of Essex County’s Jewish community, at 10 am.

Conspicuously absent from the guest list is Rabbi Shmuley Boteach, whose friendship with Senator Booker is two decades old and had been intensely close before the Iran deal came to the fore. The two had many times traveled to the Rebbe’s grave in Queens, were guests at each other’s family events, and both described their friendship in very warm, near familial tones. Rabbi Boteach has been highly critical of the Iran deal, taking ads in newspapers and organizing rallies to apply pressure to his old friend. The absence of a prominent New Jersey rabbi who had been a close friend may signal that Mr. Booker prefers a room filled with Jewish leaders who have not been as vocally critical.

According to an email from one source with intimate knowledge of Mr. Booker’s staff, “Some are now pushing cory to invite [Rabbi Shmuley]. …. but they won’t; the story here is the political cover provided by sycophants to cory just 3 days after his announcement and jewish leaders allowing themselves to be used. [Others are] being punished for speaking out against his choice. people are being rewarded for their silence.”

Rabbi Genack told the Observer that he intends to attend. “I am going,” he emailed. In a later phone interview, he said, “I am going. I’m profoundly disappointed in his decision. I’ve been talking to him about it all along and I’m disappointed.” Reflecting the charged atmosphere—or perhaps the lack of courage on display throughout this episode—Mr. Genack tried to roll back his critical remarks moments after making them. After twice characterizing himself as “profoundly disappointed” by Mr. Booker’s decision, the rabbi thought better of his words and told the Observer that he had intended his remarks not to be attributed to him. However profound Mr. Genack’s disappointment, he also helped organize a conference call two weeks ago during which Mr. Booker explained his position to the Jewish community, before he had announced which way he’d be voting.

Some attendees are characterizing their attendance as an opportunity to give the senator a piece of their minds. Dr. Chouake told the Observer, “I am planning on attending because members of the Senate are working on legislation to mitigate the problems with the JCPOA and that is what I expect to discuss.”

Mort Klein, the national president of ZOA, told the Observer that he instructed Ms. Fein not to attend because it was a “blatant and conspicuous attempt to sanitize Booker’s horrifying decision to support this catastrophic deal and wash away the blood he will have on his hands. Even the administration admits that the hundreds of billions of dollars Iran will get over the next few years will increase terrorism, many innocent people will be killed, and they’ll get nukes in 10 to 15 years.”

Given the anger among the community, some are shocked by how readily Jews have lined up to attend a meeting hosted by someone who days earlier announced his support for a deal widely perceived – among this very same community at least – to represent an existential threat to the state of Israel. One prominent rabbi told the Observer, “I think even Booker’s staff is surprised how quickly the Jewish leaders said yes.”

Other New Jersey pols have reacted strongly to Mr. Booker’s decision to support the deal.

Chris Christie, who is running for president, said that Cory Booker should be ashamed to back the Iran deal. Frank Pallone, who had been among the few New Jersey Congressman who had not announced his position (on Tuesday, he told Observer sister site PolitickerNJ that he was “honestly undecided”),came out for the deal shortly after Mr. Booker announced his own support. New Jersey’s senior senator, Bob Menendez, had long ago announced his opposition to the deal, becoming one of the “no” leaders among Democrats.

(Staffers in Mr. Booker’s office declined to confirm the details of the meeting, instead forwarding inquiries to a staffer in his press operation, who did not reply by press time; this story will be updated to reflect their remarks if they reply.)

One major donor to past Booker campaigns told the Observer in a phone interview that Mr. Booker’s decision “was so cowardly. If you’re for it, at least have the balls to say you’re for it. This guy hid. … I don’t think I’ll support him anymore.”

That sentiment might explain the sudden scramble to do some damage control. Mr. Booker has long been a darling of the Jewish community. As a Rhodes Scholar, he served as the president of Oxford University’s L’Chaim society, appointed by Mr. Boteach (who is now a frequent Observer contributor), and Mr. Booker, a powerful orator, has spoken movingly and with apparent sincerity about the need to protect and preserve the Jewish state. He has long been the recipient of campaign largesse from Jewish donors and peppers his talks with Yiddish expressions and quotations from the Hebrew Bible.

That affinity has made his capitulation on potentially the most important issue of Israel’s existence all the more puzzling to Jews who have previously backed him. One large donor told the Observer he would no longer be supporting the senator, despite having backed him dating back to his first bruising run against Sharpe James for Newark mayor. According to this donor, Mr. Booker called him personally the night before he announced he’d be voting to support the deal. He said that he told Mr. Booker, “You went to Stanford. The president went to Harvard. You think you’re smarter than these Iranian guys with their bombs. But you’re not.”