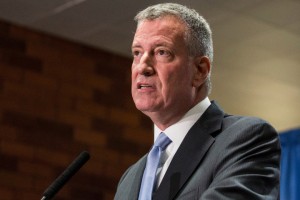 De Blasio said Tuesday that New York “is a proud immigrant city” and would welcome refugees trying to escape the conflict in their homeland.

Many public officials and U.S. presidential candidates have expressed wariness at admitting refugees in the wake of the terror attacks in Paris last week.

De Blasio chided a pair of local Republicans running for president. He called New Jersey Gov. Chris Christie “an embarrassment to this country” and said that the city “will adhere to the words of our Founding Fathers, not Donald Trump.”

Neither candidate immediately returned a request for comment. Christie said earlier in the day he is opposed to allowing Syrian refugees to enter the country — even if they’re orphaned infants.

After de Blasio expressed his support for the refugees, Christie tweeted, “@BilldeBlasio wouldn’t expect anything less from a liberal politician who is more interested in making headlines than protecting the people.”

Phil Walzak, a spokesman for the mayor, responded from his own Twitter account, “Guess @ChrisChristie missed yest deployment of 100 NYPD counter-terror cops, too busy on his failing prez campaign.”

Gov. Cuomo has also declared his support for accepting Syrian refugees.
Speaking at Harvard University’s Kennedy School of Government Tuesday, the Democratic governor said efforts to reduce the threat of terrorism must be balanced with America’s standing as a beacon for liberty and tolerance.

He said the federal government has vowed to screen the refugees for links to terrorism.

“We have to protect Americans and not lose our soul as America in the process, right? The day America says, ‘Close the gates, build the wall,’ then I say take down the Statue of Liberty because you’ve gone to a different place,” he said. “I won’t let them win by conceding defeat of the American Dream.”