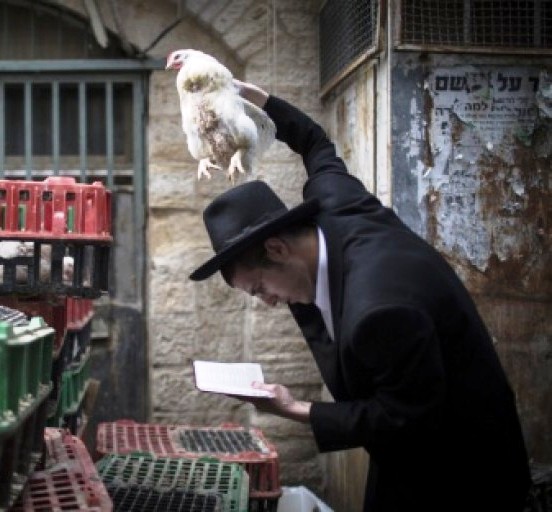 One of the best (or worst, depending on how you think about it) ways to see the New York Times’ egregious bias against Jews is to look for double standards.

An excellent (or horrible) recent example of this was an editorial condemning the New York City Parks department for offering women-only bathing hours at a Brooklyn swimming pool frequented by Orthodox Jews. A previous Timesarticle had praised a Toronto pool that offered women-only hours geared to Muslims as “a model of inclusion.” The double standard was clear; the Timesapproved of women-only pool hours to accommodate religious Muslims, while opposing women-only pool hours to accommodate religious Jews.

Recent issues of the New York Times offered two more clear examples of anti-Jewish double standards in the newspaper’s coverage. A column from Brooklyn described “the practice, called kaporos or kapparot, … meant to transfer a person’s sins to the chicken.” It ran under the headline, “A Raw Deal for Chickens, as Jews Atone for Sins,” and focused on the practice being not good for chickens. Contrast it to another column that also ran this week in theNew York Times, headlined, “In Senegal, Absolution Comes With a Wing and a Prayer.” It reports on how in the African nation of Senegal, caged birds are kept and sold. “The idea is to whisper prayers to the bird and then let it fly away, taking your problems with it,” the Times reported. Yet that Timescolumn doesn’t mention anything about how unfortunate it is for the birds in the cages, let alone dwell on it. Likewise, this week’s New York Times food section featured a (non-kosher) recipe for “chicken potpie for the modern cook” and a review of a (also not kosher) fried chicken restaurant, without expressing even a scintilla of anxiety on behalf of the chickens involved.

Got that? When it’s Brooklyn yuppies eating fried chicken, or “modern” Times readers baking them into pot pies, or even Senegalese capturing and caging birds for use in rituals, the Times doesn’t give a flying feather about the welfare of the animals. Yet when Orthodox Jews get involved, all of a sudden the newspaper starts looking at life from the perspective of the chickens. It’s ridiculous.

A similar double standard is on display in a scathingTimes editorial about Israel, headlined, “At the Boiling Point With Israel.”

The editorial is deeply problematic for many reasons. It calls an Israeli decision to move some Israeli settlers from one settlement to another “especially insulting.” What was really insulting was the White House issuing a corrected press release deleting the word “Israel” from its description of the Mount Herzl cemetery in western Jerusalem where President Obama attended the funeral of Shimon Peres, as if Israel’s former president was somehow buried in some other country. Yet there was no Timeseditorial about that insult.

The Times also repeats a State Department complaint that the settlers are being moved to a place “far closer to Jordan than Israel.” But Israel has a legitimate concern about Jordan’s vulnerability to Islamist extremism, the instability brought by the influx of Syrian refugees there, and the fact that on the other side of Jordan are Syria and Iraq, two countries with significant territory controlled by ISIS. As Dan Diker has pointed out, when Yitzchak Rabin spoke to the Knesset in 1995, he said, “The security border for defending the State of Israel will be in the Jordan Valley, in the widest sense of that concept.” Dore Gold has written about it quoting Yigal Allon. A former head of the IDF’s central command, Uzi Dayan, wrote in 2014:

Only Israel’s presence on the outer eastern border of the West Bank (the Jordan River and Valley) will enable genuine demilitarization of the Palestinian Authority, which is a condition for any stable arrangement and one of Israel’s fundamental conditions for agreeing to a two state solution.

Thus Israel’s only possible defensible border is in the Jordan Valley.

In addition to all these other problems with the editorial, the telltale double standard is also on display. It comes when the Times editorial recommends “to have the United Nations Security Council, in an official resolution, lay down guidelines for a peace agreement covering such issues as Israel’s security, the future of Jerusalem, the fate of Palestinian refugees and borders for both states.” Hmm. The UN Security Council — that includes, as a permanent, veto-wielding member, Russia.

The Times recently devoted an entire paragraph of an editorial denouncing Donald Trump to deploring the Republican presidential candidate’s naivete about Russia:

In expressing admiration for the Russian president, Vladimir Putin, Mr. Trump implies acceptance of Mr. Putin’s dictatorial abuse of critics and dissenters, some of whom have turned up murdered, and Mr. Putin’s vicious crackdown on the press. Even worse was Mr. Trump’s urging Russia to meddle in the presidential campaign by hacking the email of former Secretary of State Clinton. Voters should consider what sort of deals Mr. Putin might obtain if Mr. Trump, his admirer, wins the White House.

So there’s the double standard for you: The Times editorialists shudder at the thought of Russia meddling in the American presidential campaign. Yet these same editorial writers are eager to turn the future of Jerusalem and Israel’s border security over to a UN Security Council that includes a veto-wielding ambassador of Vladimir Putin. When Donald Trump says anything the vaguest way positive about Putin, the Times finds it unacceptable. But when President Obama and the Times editorial writers want to use Putin to do a UN end-run around letting Israel’s elected government make its own security decisions, that’s a whole different story; that’s Russian meddling the Timesendorses rather than condemns.

Which brings us back, in conclusion, to the the topic of chickens and birds. And to one thing that the New York Times might be good for: lining the bottom of birdcages.