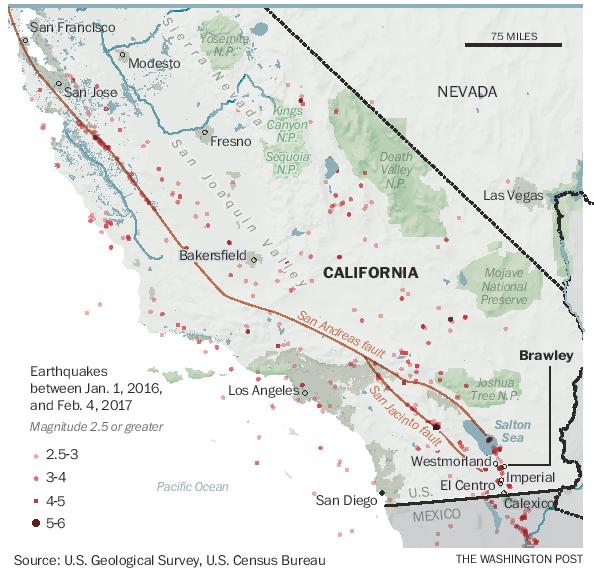 BRAWLEY, Calif. – Next to a field of alfalfa is a roadside sign celebrating the things that define life here, 170 miles southeast of Los Angeles: service clubs (Lions, Kiwanis, etc.), the 4-H club, the high school sports booster club. Down the street is a sign for the annual rodeo and parade.

In many ways Brawley is a typical farming community, but there is one distinction that makes it unique: It is the unofficial earthquake capital of California, maybe the nation. The Brawley Seismic Zone, branded a “nest of faults” by geologists, has more earthquakes than anywhere else in this earthquake-prone state, about 1,200 in the past year.

Brawley earthquakes have long been studied by seismologists. But something happened in September that sharpened the experts’ concern that a temblor in Brawley could trigger a much bigger and destructive quake from the feared San Andreas fault, devastating a wide swath of Southern California, including Los Angeles.

To live in Brawley (population 26,000) or the nearby Imperial Valley communities of El Centro, Imperial and Westmorland or the border town of Calexico is to live with the rumbling sound and wall-shaking menace of earthquakes.

“Most people who’ve just moved here are much more afraid than us old-timers,” said Neal Jack, 93, whose family has farmed here since 1913. Jack remembers the quake of 1940, which collapsed the roof on the local high school auditorium, ripped the earth and knocked homes off their foundations. The local newspaper reported eight deaths and dozens of injuries throughout the valley. In Los Angeles, tall buildings swayed.

Sometimes the quakes come in swarms of several hundred low-level rumblings in rapid succession. Even for longtime Brawley residents, swarms are unnerving. Take the cluster of about 250 that hit on New Year’s Eve. “We’re a little bit snobby about earthquakes,” said Betty Miller, 62, editor of the Desert Review weekly newspaper. “If it’s a 3.0 or 4.0, that’s nothing. But when it wouldn’t stop, that was different.”

Chris Goodspeed, 35, manager of KROP (“Imperial Valley’s Talk Radio”), was at work when the little quakes began: “You could hear things coming and then the building went boom-boom-boom. I was ducking for cover. I began to wonder: Are we going to make it to 2017?”

Gilbert Vallarta, 64, a barber, was reclining at home: “That last one almost shook me off my La-Z-Boy.”

A swarm in September led the state to convene an emergency session of California’s earthquake prediction evaluation council, which includes experts from the California Geological Survey, the U.S. Geological Survey and several universities.

What they saw from the seismographs was alarming: One sequence of the swarm had come to within about six miles of the terminus of the southern portion of the San Andreas fault.

Having a swarm of significant quakes occur so close to the terminus of the fault was worrisome. The northern portion of the San Andreas was responsible for the earthquake that devastated San Francisco in 1906. But the southern portion, which runs within 3o miles of Los Angeles, has not caused a quake in several hundred years. There is a growing worry that this quietude is unlikely to last.

A quake centered in the Brawley Seismic Zone might not be that destructive locally, but seismologists fear that it might trigger the long-awaited “Big One” from the southern San Andreas.

(In 1994, the Northridge quake, which was centered outside Los Angeles and came from a previously unknown fault, killed at least 57 people and did billions of dollars in damage.)

The experts were blunt in their assessment of the September swarm: “The close proximity to the San Andreas fault increases the concern that these earthquakes could trigger a large earthquake (magnitude 7.0+) on the San Andreas itself,” they said in a memo to the state’s emergency services director, Mark Ghilarducci.

Ghilarducci ordered a conference call with emergency managers in eight Southern California counties. Nothing mobilizes officials faster than a mention of the San Andreas fault. A simulation done in 2008 by the U.S. Geological Survey predicted that a 7.8-magnitude quake from the southern San Andreas could last two minutes and inflict more than 1,800 deaths, 50,000 injuries and $200 billion in damage.

In recent years the city of Los Angeles has undertaken a large-scale program to retrofit thousands of buildings to withstand a sizable quake. (A similar program is underway in San Francisco.)

Earthquake prediction is not an exact science. So while the experts agree the southern San Andreas will someday begin shaking the earth, there is no telling when.

Unlike the hard-crust earth found in most regions of the country, the ground beneath much of the Imperial Valley is soft, and it is warmed by geothermal forces. Eons ago, the area was beneath what is now the Gulf of California. The zone is what seismologists call a “spreading center” with faults that slowly stretch the earth.

Pat Abbott, a professor emeritus of geology at San Diego State University, said of the ground beneath Browley: “It is different really than anywhere in the U.S.”

“A lot of money has been spent trying to understand the geology of the Imperial Valley,” said Lucy Jones, who recently retired from the U.S. Geological Survey.

Jones is one of the authors of a soon-to-be-released paper suggesting that the September swarm, with its proximity to the San Andreas, merits additional study.

Meanwhile, in Brawley, there’s an earthquake saying, says Neal Jack: “The longer it’s been since the last one just means you’re closer to the next one.”